Sessions Should Leave Online Gaming Regulation to the States

Andrew Quinlan
|
Posted: Apr 15, 2017 12:01 AM
Share   Tweet
The opinions expressed by columnists are their own and do not necessarily represent the views of Townhall.com. 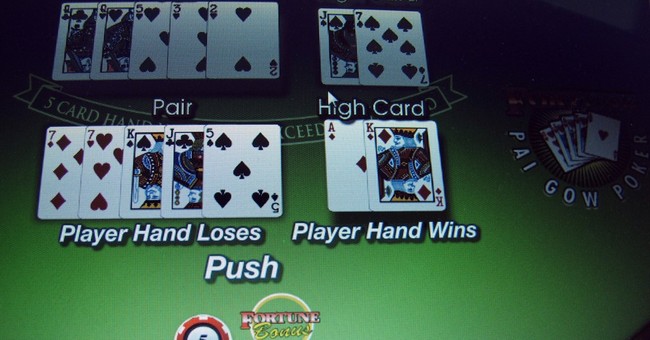 America's governors want to make sure that Attorney General Jeff Sessions won't move to override state online gaming laws. The bipartisan heads of the National Governors Association, Virginia Gov. Terry McAuliffe and Nevada Gov. Brian Sandoval, wrote in a recent letter to Sessions that "States are best equipped to regulate and enforce online gaming." They're right. He should heed their words and restrain himself from reversing a DOJ ruling that paved the way for states to legalize online gaming if they choose.

For years Republican mega-donor Sheldon Adelson has been trying to stop the proliferation of legal online gaming. Some states—New Jersey, Nevada, and Delaware—have opted in recent years to allow online gaming for those within their borders. Other states like Illinois and Georgia have begun to sell lottery tickets online. Due to the threat that online gambling poses to his casino empire, Adelson has pledged to spend "whatever it takes" to preempt their efforts at the federal level.

He's been pushing the Restoration of America's Wire Act (RAWA) to override state governments and prevent legalization of online gaming. RAWA is premised on the flawed notion that the Wire Act was intended to prohibit online gaming in the first place, but legislative history reveals that not to be the case.

The Wire Act was passed before the internet existed. Its objective was to limit “the placing of bets or wagers on any sporting event or contest” by “transmission in interstate or foreign commerce.” No reasonable reading of the Wire Act's text suggests that online gambling should be prohibited, especially when it is intrastate only. As the Competitive Enterprise Institute's Michelle Minton has extensively documented, Congress and the Department of Justice at the time understood the Wire Act to be narrowly focused on targeting the mafia's telephone-run sports gambling racket.

RAWA was designed to assist states in the enforcement of their laws, not to override them. Unfortunately, prosecutors in the 1990s started using the Wire Act for online gambling offenses, and by 2002 the Bush administration's Department of Justice declared that it prohibited not just sports betting but also "casino-style gambling" online.

This expansion of the Wire Act was reversed by the Justice Department in 2011, which upset Adelson and his allies in Congress. They argue that now reversing the 2011 ruling would "restore" the Wire Act when the opposite is true. The Wire Act as it is understood today as not prohibiting intrastate online gaming if states choose to allow it more closely hews to the statute's original meaning than it would under RAWA.

Unfortunately, Attorney General Sessions said during his confirmation hearing that he disagreed with the 2011 decision and would like to reconsider it. While not outright saying he will expand the Wire Act's interpretation once again, his stance ought to be concerning for all who believe in the importance of federalism and individual rights.

Republicans rightfully bemoan the size of the federal bureaucracy and the reach of the regulatory state. Yet many of them are all too eager to expand the power and scope of the federal government if it means serving the interests of a billionaire casino owner who fills the Republican Party's coffers. Hopefully, Attorney General Sessions will realize that the Justice Department got it right in 2011 and not interfere in what is and ought to remain a matter for the states to decide.