Andrew Pollack
|
Posted: Feb 14, 2020 12:01 AM
Share   Tweet
The opinions expressed by columnists are their own and do not necessarily represent the views of Townhall.com. 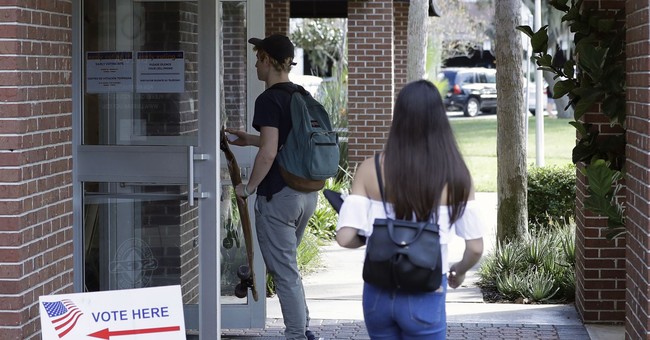 Maybe now that the impeachment circus is behind us, we can start having a serious conversation about what’s truly at stake in the 2020 election.

Granted, my perspective is biased because my daughter Meadow was murdered in the Parkland school shooting, but to me the most important issue is school safety. And school safety is the clearest reason to re-elect Donald Trump.

This opinion might come as a shock to some parents. After all, the mainstream media did everything it could to spin a narrative that blamed Republicans and/or President Trump for the shooting. But I wasn’t interested in narratives. I wanted to know the facts. And so did the president.

When I met with him in the Oval Office, I told him that he should form a federal fact-finding commission to gather and spread best practices for school safety. President Trump told me that he would. And he did. The report his administration compiled was unprecedented, and has helped school leaders all over the country take concrete steps to making their schools safer.

I sat next to President Trump when that report was released. A table full of families of victims and school safety experts spent an hour discussing the findings. Then the President opened up the floor to media questions.

The first question: “Mr. President – are you still planning on shutting down the government?”

Trump turned to me and said, “Can you believe these people, Andy? We just spent an hour talking about school safety and this is all they care about. I have to deal with these people every day.”

By that time, I knew exactly what he was dealing with. I was never a political guy before my daughter was murdered. After, all I wanted was to find the facts, to expose them, and to make sure people learned their lessons. But chances are you never even heard of Trump’s school safety commission.

If you have, you probably heard that it was “racist” because it recommended repealing Obama-era leniency policies that the media falsely insisted had absolutely nothing to do with the tragedy.

In reality, these policies are the number one reason why parents must band together to make sure that Trump keeps the presidency.

I spent a year investigating why my daughter was murdered and wrote a book exposing everything: Why Meadow Died: The People and Policies that Created the Parkland Shooter and Endanger America’s Students. It was the most avoidable mass murder in American history. The shooter could not possibly have raised more red flags.

But his behavior was consistently swept under the rug by school officials, because the Broward County school district was pushing a policy to fight the so-called “school-to-prison pipeline” by lowering suspensions, expulsions, and arrests. They went so far as to allow students to commit three free misdemeanors every year.

The leniency policies pioneered in Broward were forced on schools across the country by the Obama Department of Education. They decided that disparities in discipline by race and disability status were evidence of teacher racism and ableism. So, the feds threatened to investigate school districts based on their discipline numbers and remove federal funding if they didn’t adopt leniency policies.

Thus the policies that enabled the Parkland shooting were spread to schools across America without parents’ knowledge or teachers’ consent. They are probably in your kid’s school.

Chances are these policies won’t lead to your kid getting murdered in class.

But we know they create the same dangerous dynamics across the country that we saw in Parkland. A national poll found that 70 percent of teachers say that the decrease in discipline is due to a higher tolerance for misbehavior, and 50 percent say that it's due to under-reporting. This has harmed learning and allowed disruption, bullying, and violence to run rampant.

As long as the federal policy was in place, parents could complain but their voices wouldn’t matter because the school board had to operate in fear of losing funding. President Trump knew that he would take a hit from the media for removing that federal pressure.

He wanted to do the right thing to keep kids safe.

But if any Democrat is elected to the White House, you can be guaranteed that this federal pressure will come back into force. School districts will have to prioritize producing fake statistics to satisfy distant, politically correct bureaucrats no matter how much danger it puts your kid in.

Pollsters say that suburban moms are drifting away from President Trump. I’m sure many have their reasons. But they need to know the facts. Any Democrat President would force Parkland’s dangerous policies into their kids’ school. For any mother or father, nothing should be more important than their kids’ safety. And that’s why responsible parents need to rise up and ensure that President Trump is re-elected.

Andrew Pollack is a school safety advocate and co-author of Why Meadow Died: The People and Policies that Created the Parkland Shooter and Endanger America’s Students.