Andrea Kaye
|
Posted: Mar 30, 2019 12:01 AM
Share   Tweet
The opinions expressed by columnists are their own and do not necessarily represent the views of Townhall.com. 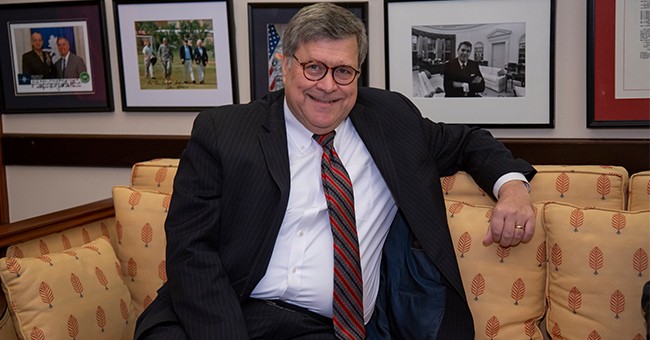 From Facebook to Twitter, to PayPal and Go Fund Me, conservatives have not only been silenced but “de-platformed,” which is to not only remove their voices but also their means of income. On a recent media hit, I was asked what the solution to Big Tech’s discrimination is. How can Big Tech's expansion, and therefore control, be minimized allowing competition and freedom to flourish?

Understandably, when I mentioned government involvement, the conservative hosts immediately balked. Having the government step in to control speech is hardly the solution. But there is another way to possibly curtail an out of control Big Tech through government: the DOJ and its Antitrust Division.

To protect American consumers as well as the reputation of the Trump administration, William Barr, the United States’ new Attorney General, has an obligation to transform the Department of Justice to ensure that it imposes checks and balances not just on itself, but big business, particularly Big Tech.

The task ahead of him will certainly not be an easy one; it may even amount to the most challenging job in all of Washington. As was recently reported, Big Tech is on a “lobbying spree,” spending money on influence peddlers in a manner that has shocked many veteran DC insiders. Big Tech’s money will be going head-to head-against Barr, who bluntly stated at his confirmation hearing that, “people wonder how such huge behemoths that now exist in Silicon Valley have taken shape under the nose of the antitrust enforcers.”

While no conservative supports unnecessary intervention in the marketplace, most understand that big business, with its frequent capitalization of government influence and high barriers to entry, is an entirely different animal from small business. Unfortunately, however, under the previous Attorney General’s leadership, the Antitrust Division – while governing with a well-intentioned desire to tamper off red tape – has struggled to grasp this concept. As evident from everything from its advancing of Facebook and Google’s interests in Viamedia v. Comcast to its arguing that consumers cannot sue Apple for anti-competitive behavior in Apple v. Pepper, the DOJ’s failure to see the forest in the trees has made Big Tech stronger rather than more in line with market realities.

The Antitrust Division’s seemingly singular objective of deregulation has caused it to not only decline using existing antitrust law to protect consumers from big business, but also to prompt the DOJ to flirt with the prospect of weakening and even eliminating many of the century-old enforcement mechanisms that protect consumers by restraining the influence of anti-competitive institutions.

For example, the Wall Street Journal reported in late February that the Antitrust Division is scrutinizing the antitrust consent decrees between the DOJ and the nation’s two largest collectives in the music industry, ASCAP and BMI, which are the product of collusion by music publishers. These 70-year old agreements have ensured that ASCAP and BMI, deemed monopolists by the DOJ for possessing 90 percent of music’s public performance copyrights, continue their important function of simplifying the process of purchasing music licenses for small businesses without engaging in the same predatory behavior the DOJ found them committing years ago.

The leaders of the Antitrust Division’s interest in potentially terminating or significantly altering these decrees provides more insight into their antitrust governing philosophy with Big Tech than anything thus far because it raises the question: if they have hesitations about the DOJ stopping proven collusive behavior, then what won’t they have reservations on using the nation’s antitrust laws for?

In the case of the ASCAP and BMI decrees, songwriters are free and welcome to negotiate directly in the free market in the absence of government intervention. The DOJ restraints kick in only when they topple the industry’s market forces by joining one of the two cartels to fix prices. And yet, the Antitrust Division seems skeptical that the DOJ should even take a light-touch regulatory approach to institutions with nearly 100-percent market share and anti-competitive track records.

This logic perfectly explains why the DOJ has so far balked at acting against Big Tech: it seems to be under the illusion that bigness always arises from entrepreneurial innovation and efficiency, never coming about from less laudable reasons and motivations. It provides further context into why the head of the Antitrust Division touted Big Tech’s market share in a February and, three months earlier, quoted an industry insider who argued that “imposing restrictions on a free economy to assure freedom of competition is like breaking a man’s leg to make him run faster.” The division appears to think that concentration of power, even when occurring because of collusion or due to government grants, is always an indicator of the free market at work.

Nevertheless, the American people continue to suffer. De-Platforming, discrimination, and improper data collection continue unabated by the nation’s biggest tech giants as their influence gets more significant than ever before. Other countries continue to crack down on their abuse, with Parliament announcing on March 6 that the company has just ten days to answer its questions about its progress on stopping its anti-competitive behavior, while the DOJ unintentionally continues to increase its power.

William Barr has not even been on the job for two weeks, but he undeniably has his work cut out for him. By this point, it should be clear that the current antitrust problem transcends beyond the current DOJ’s handling of Big Tech. It represents a symptom of a broader issue: the department having a skewed vision of what it takes to maintain free, competitive marketplaces in this country – a vision that seems entirely at odds with Barr’s personal convictions.

Thankfully, Barr has stated that he would “Iike to have the antitrust [division] support that effort to get more involved in reviewing the situation from a competition standpoint.” If the DOJ is ever going to have a paradigm shift, it’s going to have to come from the top. One can only hope that Mr. Barr is up for the job.

Andrea Kaye is host of the nationally recognized Andrea Kaye Show, heard on KCBQ 1170 AM The Answer in San Diego California. Find out more at andreakayeshow.com.