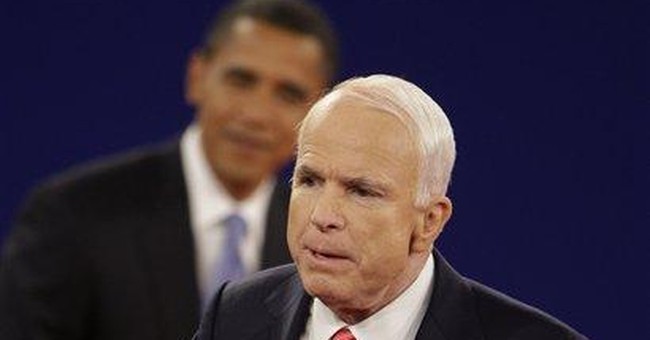 McCain is suggesting his “American Homeownership Resurgance Plan” be taken as a carve-out of the Treasury Secretary Hank Paulson's $700 billion financial "rescue" package to empower the Treasury to purchase bad mortgages and refinance them to 5 percent fixed rate for homeowners who can’t afford their current payments.

This essentially would replicate existing legislation written by Democratic Sen. Chris Dodd (Conn.) and Democratic Rep. Barney Frank (Mass.) to give the Federal Housing Administration the authority to guarantee up to $300 billion in bad loans.

Dodd-Frank, which was signed by President Bush last July, was strongly opposed by a cabal of conservatives who said it forced taxpayers to bailout out greedy lenders and irresponsible home buyers.

After Dodd-Frank passed through Congress House Minority Leader John Boehner (R.-Ohio) said, "I'm deeply disappointed the White House will sign this bill in its current form. We must take responsible steps to ensure our financial and housing markets are sound, but the Democrats' bill represents a multibillion dollar bailout for scam artists and speculative lenders at the expense of American taxpayers."

McCain’s plan, however, is designed to go even farther than Dodd-Frank.

Doug Holtz-Eakin, senior policy adviser to the McCain campaign told reporters on a conference call Wednesday morning, “We know there’s been a lot of talk about stabilizing financial markets and using direct purchase authority out of the administration but it does not seem that has been targeted effectively at least in the public discussion on the real problem, which is the housing market. It’s also true that were initiatives, the Dodd-Frank proposals to help some homeowners but they weren’t very broad in scope and they were typically efforted to help 400,000, 500,000 homeowners in an economy where we have many, many times that who are troubled.”

“We can help literally millions of people,” Holtz-Eakin said. “The first step is that you have to desire to refinance…the question is, how many people will pick up the phone.”