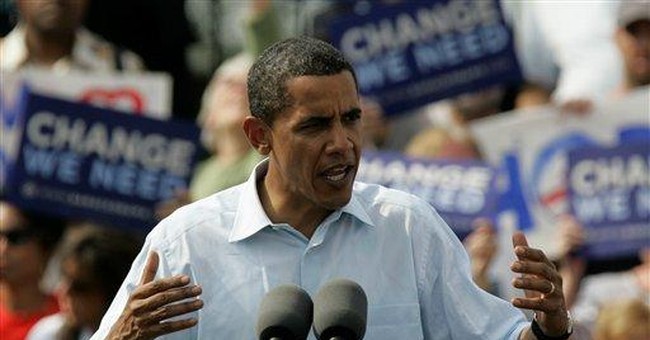 Obama was given a bracelet by Tracy Jopek to honor her son’s, Sgt. Ryan David Jopek, military service. Sgt. Jopek enlisted in the Wisconsin National Guard in 2005 and was killed by a roadside bomb in 2006. Jopek gave Obama the bracelet the day of the Wisconsin primary and said it was “it was an honor” when Obama mentioned her son in his victory speech that evening.

She later emailed the Obama campaign last February asking them not to discuss her son in upcoming speeches or debates. Sgt. Jopek’s father Brian Jopek, who is divorced Tracey Jopek, told Wisconsin Public Radio he believed his ex-wife wanted the bracelet to be kept “private.”

Brian Jopek said, "She just wanted it to be something between Barack Obama and herself."

“She has turned down any subsequent interviews with the media because she just didn’t, she just didn't want it to get turned into something that it wasn’t,” he said. “She had told me that in an email that she had asked, actually asked Mr. Obama to not wear the bracelet anymore at any of his public appearances.”

During the first presidential debate on Friday, Obama specifically mentioned Jopek’s deceased son by name. Obama talked about Sgt. Jopek in response to a story his Republican rival John McCain told about receiving a similar bracelet from a mother who had lost her son in the war, Matthew Stanley.

"I've got a bracelet, too, from Sergeant — from the mother of Sergeant Ryan David Jopek, given to me in Green Bay," Obama said, looking down to read the name. "She asked me, 'Can you please make sure another mother is not going through what I'm going through?' No U.S. soldier ever dies in vain because they're carrying out the missions of their commander in chief. And we honor all the service that they've provided."

After Obama told the story, Tracey Jopek confirmed she had asked Obama not to mention her son again through email, but said she was “ectastic” he did so during the debate.

Anchors Brian Kilmeade and Steve Doocy asked Gibbs why Obama would discuss the bracelet after family members asked previoulsy expressed discomfort with his doing so.

“Let’s get the facts straight before we start making stuff up on the news,” Gibbs told them.

“Don’t say we’re making stuff up!” Kilmeade said gesturing to an array of news articles on his couch. “We’re telling you quotes from both parents!”

Gibbs refused to acknowledge Sgt. Jopek's mother and father had been made uncomfortable by Obama’s use of the bracelet in the past. “She didn’t want the memory of her son politicized and Barack Obama respects that…I’m not going to get into a family situation where there’s been a divorce.”