Most Events Suspended, Other Decisions Day-to-Day 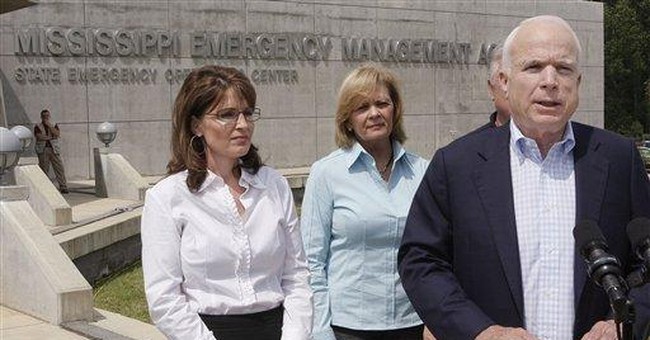 Republican presidential candidate John McCain announced most of first day’s activities at the Republican National Convention would be cancelled due to incoming hurricane storms in the South.

“We are going to suspend most of our activities tomorrow except for those absolutely necessary,” McCain told reporters in St. Paul via satellite from St. Louis Sunday afternoon.

As he spoke Hurricane Gustav, predicted to reach Category 5 status, was approaching New Orleans, the site where deadly Hurricane Katrina struck in 2005. McCain said,“It’s time to take off our Republican hats and put on our American hats and say ‘American we are with you and America, we are going to care about people in their times of need.'”

“We are going to display that,” he added.

President George W. Bush announced earlier in the day he would not be attending the convention after it became apparent Hurricane Gustav was reaching catastrophic wind speeds. Other speakers slated to address the convention Monday included Sen. Joe Lieberman and California Governor Arnold Schwarzenegger.

Party officials in St. Paul said they were unsure if McCain and his newly-minted vice presidential candidate, Sarah Palin, would be attending the convention to accept their party’s nomination.

“All the speculation about not being here is completely premature,” McCain Campaign Manager Rick Davis said. “I can make no promises.”

Republican National Committee Chairman Robert “Mike” Duncan said “essential” activities such as the election of officers, rules adoption and a vote for they party’s platform would be performed Monday.

“We will proceed with business tomorrow, it will be abbreviated,” Duncan said. Campaign Manager Davis described these functions as “requisite duties that are required…to constitute” the convention and the convention would resume “as soon as is practical.” Convention rules require that GOP delegates do meet and formally nominate McCain as their official presidential nominee.

Davis also said the GOP would refrain from any “political rhetoric” for the day as well. Davis said he was unsure if the campaign would be taking down television attack ads against their Democratic opponent Barack Obama.

McCain officials promised to keep media updated on the fluctuating schedule as the weather permits. Davis said the McCain campaign would be making decisions on a “day by day basis.”