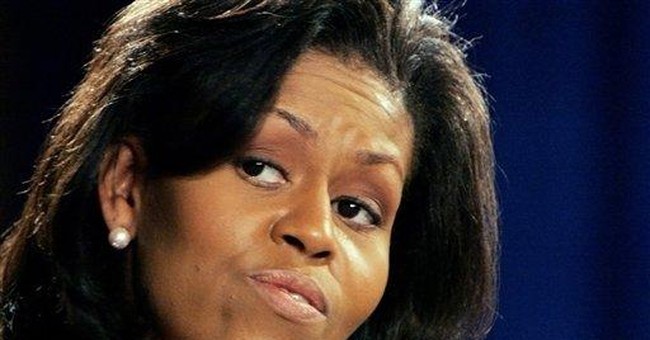 “What happened was that the conservative press — Fox News and the National Review and columnists of every ilk — went fairly deliberately at her in a pretty systematic way,” Obama told Glamour’s editor-in-chief Cindi Leive. The women’s magazine published excerpts of the Obama interview on their political blog Glamocracy on Thursday morning. [Full disclosure, I blog there every Tuesday]

“It took a toll,” Obama said. “If you start being subjected to rants by Sean Hannity and the like, day in day out, that'll drive up your negatives.”

A joint poll conducted by the Associated Press and Yahoo released July 2 found 35 percent of voters had an unfavorable impression of Mrs. Obama. 30 percent viewed her favorably.

Michelle Obama made headlines earlier this year for saying her husband’s candidacy made her proud of her country for “the first time in my life” and encouraging women to “move out of the money-making industry into the helping industry” in Zanesville, Ohio — one of the poorest areas of the nation. Her thesis on race relations, which she wrote as a student at Princeton University, is also considered controversial by some outlets.

News outlets across the political spectrum have covered these stories.

Leive asked Obama if he believed his GOP presidential rival John McCain “had a hand in the attacks on Michelle.” Obama said, “I wouldn’t say the McCain campaign itself” and then posited the “vast-right wing conspiracy” theory coined by his former Democratic opponent Hillary Clinton. “I would say that the apparatus of conservative columnists, blogs and the like. Talk shows, talk radio? When you see in the span of two or three or four weeks essentially the same talking points being used on a whole variety of shows or a whole variety of columns, over and over again....Hillary Clinton was subject to this, others have been subject to this in the past.”

Obama also singled out blogs and email because “the internet allows rumors, myths, attacks to get out there very quickly to a lot of people.”