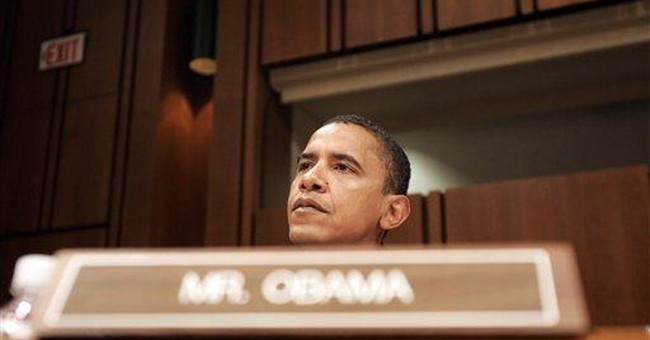 Barack Obama, deemed the most liberal U.S. Senator by the National Journal, called rankings by outside groups “silly” in the final Democratic presidential debate before critical March 4th nominating contests in Ohio and Texas.

Obama said the fact that his most liberal rating was based partially on an immigration vote and a vote to increase government oversight proved “how silly these ratings are” and that the “categories don’t make sense.”

This was in response to a question by NBC’s Brian Williams, who moderated the debate with Tim Russert, who asked, “How can you run with a more liberal voting record than Ted Kennedy” in the general election.

The National Journal based their ratings on 99 Senate votes made during 2007. 36 of them were related to economic issues, 34 of them to social issues and 29 of them to foreign policy issues. Some were weighted more heavily than others, based on a scale of 1-3.

During the debate Obama defended only two of those votes, both of which he adopted a more liberal position than his fellow presidential contender Senator Hillary Clinton (D.-N.Y.)

“It turned out that Senator Clinton and I had differences on two votes,” he said. The first Obama noted was a vote to allow certain immigrants to say in the United States while renewing their visas. Obama said he voted “yes” because, according to him, not doing so “meant essentially that you were going to have illegal immigrants for a year, because they wouldn’t go back and I thought that was bad policy.”

The other vote Obama discussed was to create an independent “Senate Office of Public Integrity” to handle complaints against senators and would work with the existing Senate Ethics Committee. Obama voted “yes.” Clinton voted “no.”

“According to the National Journal, that position is a liberal position,” said Obama regarding his vote to create the replicate office. “Now, I don’t think that’s a liberal position. I think there are a lot of Republicans and a lot of independents who would like to make sure ethics investigations are not conducted by the people being potentially investigated. So the categories don’t make sense.”

Some of the other votes the National Journal ranked Obama on that he did not mention included his votes: to support tax hikes, to require a study of global warming effects for federal water projects, to allow union organizers to bypass secret balloting processes to organize workplaces, to mandate increased vehicle fuel efficiency standards, permit “sanctuary city” policies, against making English the official language of the United States, against defining a fetus as an “unborn child,” against renewing President Bush’s terrorist monitoring program, to support voting rights for the District of Columbia and to cut funding and withdraw troops from Iraq according to a set date.