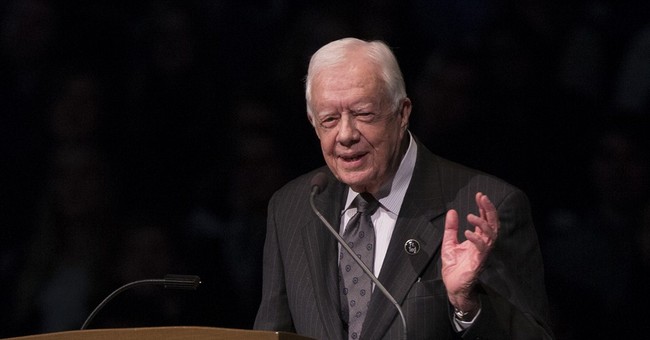 We awoke Tuesday morning to learn that history had indeed repeated itself. The lessons of Neville Chamberlain’s failed diplomatic effort were not studied nor learned by President Barack Obama and Secretary of State John Kerry. The claims of “peace in our time” are empty if dependent upon the goodwill of despots, dictators, theocrats, and autocrats – of which the Iranian regime can be classified.

There are those who seek to compare this agreement to President Reagan’s with the Soviet Union. There is a major difference. The Soviet Union was not a theocracy run by clerics who embrace the necessity of an apocalyptic event spurring the return of the 12th Imam, the Mahdi. With the Soviet Union there was always a standing MAD theory – mutually assured destruction. That is not a viable consideration with Iran. Reagan also believed in the mantra “trust but verify.” How can we ever trust the Iranian regime, which has been at war with America since 1979 and has not changed its belligerent behavior since?

President Jimmy Carter gave us the Ayatollahs, President Obama just solidified their power. Amazingly enough, it was during the Carter administration that Americans were taken hostage, and history again repeats itself as four Americans are held today by Iran – Amir Hekmati, Saeed Abedini, Jason Rezaian, and Robert Levinson. President Obama announced the signing of an agreement with a regime that chants “Death to America.” What more disqualifying evidence does one need? Not to mention the plethora of human rights violations of which Iran is guilty.

Economic sanctions are lifted which means the world’s lead sponsor of Islamic terrorism will receive billions of dollars. And, in the case of violations, the restoration of sanctions requires a committee to “snapback” these sanctions – a committee of which Iran is a participant. The agreement only delays uranium enrichment for ten years, and Iran has seen a 20% increase of enriched uranium during these negotiations. For fifteen years, there are to be no new nuclear reactors. Therefore, in the short term, Iran will be able to heighten its support of terrorism. In the long term they will reach a threatening nuclear capability.

The agreement states that Iran must continue to live under the UN weapons embargo for another five years for conventional arms and eight years for missiles. Funny, that embargo has not stopped Iran from supplying the deadly EFP (explosive force penetrators) to Islamic jihadists responsible for the deaths and maiming of thousands of U.S. troops. As well, this embargo does not preclude Iran from supporting Hezbollah, Hamas, and the Houthis with weapons.

What should we have done or should we do? First, realize that Iran is our enemy, one that is holding Americans hostages and demand their release. Second, economic sanctions should be increased. The world failed to isolate and prevent the economic restoration of Germany in the 1930s and witnessed a full bore investment into one of the greatest war machines the world would come to know. We should implement a naval blockade against Iran and shrink the ability of the Iranian Revolutionary Guards’ naval forces from adversely influencing the sea lanes of commerce in the Persian Gulf. We should be enabling a deterioration of the stranglehold of the crazed clerics that control the Iranian people.

Some will decry fear mongering and castigate anyone opposing this agreement as seeking war. Such were the claims against Sir Winston Churchill, who warned that history has a way of punishing those who pay it no attention.

And history certainly remembers Churchill in a far more esteemed status than Chamberlain.