Alan Korwin
|
Posted: Jun 07, 2016 10:09 AM
Share   Tweet
The opinions expressed by columnists are their own and do not necessarily represent the views of Townhall.com. 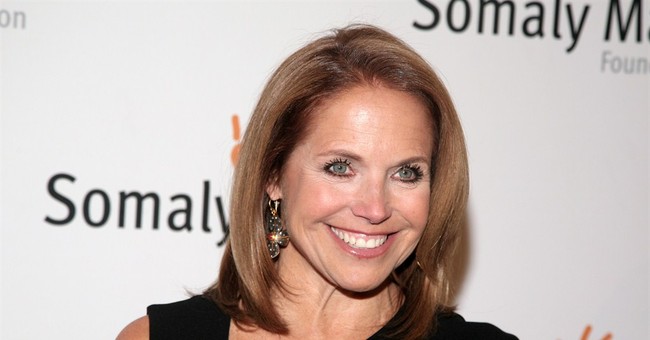 Celebrated journalist Katie Couric and her producers, already in a world of hurt for falsifying an anti-gun documentary, may be in felony violation of federal gun-control laws for buying guns across state lines without a license, federal paperwork or even background checks. No one was harmed in the incidents.

C'mon, they're not REAL criminals -- that's what 25 years of experience and my ten books on the subject tells me. They are paper criminals, what a lot of innocent Americans unfortunately become. These gun laws are really about paperwork, when you get past phony news hype and look closely.

We should repeal those laws at long last. Katie Couric, her producers, and thousands of others should be set free, and their records cleared. Katie Couric is now the poster child for bad gun laws. Couric has been nominated for a Golden Calf Award for her deliberately deceptive reporting by Jews for the Preservation of Firearms Ownership, http://www.jpfo.org

What Couric and especially her producer Stephanie Soechtig and others were apparently complicit in doing, was to buy guns outside their home state. That is strictly illegal under 18 USC §922 of the federal code, and has been since 1968, if you do it privately, which they claim they did, and backed up with video recordings.

They might claim they didn't also take the guns out of state, but that would have just added an additional offense (18 USC §924), for each gun (apparently three sidearms and a rifle), another feckless paper crime Katie has to suffer. Worse though, they induced an otherwise innocent individual to break the law. That's serious. They could try to twist the law to say it only makes the transferor (the seller) the guilty party, so they can skate, but it's not only clear both parties would be culpable, the BATFE website says acquiring the firearms is illegal, not just transferring them. And they conspired too, another violation (18 USC §371).

You go to prison for five years for each count of all of this (sentences vary depending on the judge). No one is harmed by these sales, there is no victim, the guns are no more or less dangerous than any you buy in a regular retail store with paperwork forms. You just go to jail, if government somehow finds out.

The big push primarily from Democrats for an additional background check requirement, sometimes called a "universal type," with gun registration, if there had been one in place at the time, would not have changed their filmed scenario. The same sale could have taken place the exact same way, equally illegally, it would just raise the unenforced penalty. ("Unilateral" background checks, which don't register gun owners, is a proposed alternative. http://www.gunlaws.com/BIDSvNICS.htm)

So here we have elites in abject advocacy for still more repressive gun laws, which cannot work, in propaganda that relies on deliberate falsification to make its point, and violates federal gun law numerous times to do it. Typically, such people walk.

In this case though, with the public mad as can be at Couric's deceptions and misuse of the public trust as a journalist, prosecution for her crimes seems more likely. At the least, overlooking them or ignoring them completely will be more difficult -- the acts, if they were committed, are multiple federal felonies. To treat elite reporters differently than the public would be a grave injustice.

But ask yourself this: What do we get out of prosecuting this misguided reporter's team, after what she's just been through, for what might even be an innocent mistake? Forget her lame non-apologies. She doesn't have any better ability to know these ridiculously complex laws any better than anyone else -- even though ignorance (and we know there's plenty of that) isn't an excuse. Lots of people lie when caught with a hand in the cookie jar. Have you no heart?

Instead, why not leverage her risk of prosecution for a groundswell of support to eliminate these overbearing laws, and the infringements they represent? Repeal this outrageous infringement once and for all! Spare The Couric Three!

If you can legally buy a gun in your home state, the Second Amendment protects your right to buy it a mile away. Or on the other side of this great land. Reinstate this axiom. Don't prosecute Katie Couric for being a felony gun runner. Let her be the poster child for improved laws for people with guns who didn't do anything really wrong. No harm. No victim. No blood, no foul.