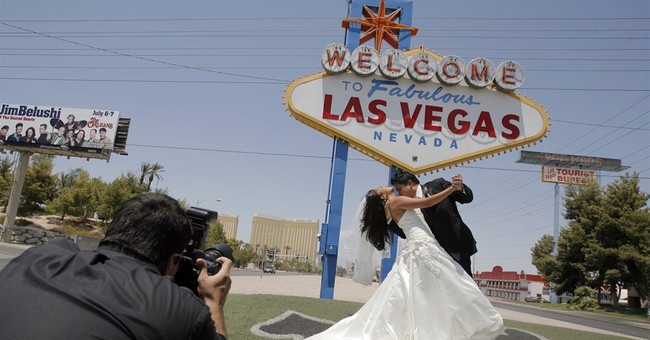 Solving the marriage equation is easy --it resolves itself when you simply use the proper term:holy matrimony.

All indications suggest the U.S. Supreme Court is likely to miss this connection in its decision due any day now.

Marriage has always essentially been a function of “the church” (figuratively speaking).

It is not a function of the state—and in fact the state is specifically precluded from any activity whatsoever here—by the First Amendment:

“Congress shall make no law respecting an establishment of religion, or prohibiting the free exercise thereof;”

Seen from this vantage point, the correct and inalienable vantage point, it is only our government’s insertion into matters where it has no legitimate delegated authority that has created any problems with which America now wrestles.

It is important here to understand the word government itself in a way that may not be familiar to you.

Government is not this “thing” that exists. Government is like soylent green: government is people. When you see the word government, in this case at least, read, “People working in Washington.”

If you can find a chapel that will marry you to a rock, many living things at once, whatever your heart desires without harming others, government (people working in Washington) has no legitimate sanctioned power in the matter, and it is forbidden for it (them) from getting involved. If you think some sort of government stamp is what makes marriage legitimate, government has succeeded in brainwashing you.

The many plain-English definitions of the word marriage, q.v., are not at issue (the marriage of plasterboard to studs to make a drywall, for example). The people in Washington have no legitimate authority over the word, everyone knows that.

Matters of inheritance, medical care, joint property, custody of children, real estate, royalties, social security, pensions—these are contractual matters between consenting parties and can be handled very nicely by courts, which is where they properly belong. Courts can be properly run by governments of course, from Washington or otherwise, and make competent decisions.

Taxing people unequally based on their living arrangements or offspring, which is where we find ourselves today, is a grotesque violation of the First Amendment ban and always has been, which leads us to the most difficult point.

Extricating ourselves from the entire government-usurped married-life problem is huge. People working in Washington have insinuated their way into our lives in such intricate and intractable ways that untangling the mess could take decades. We didn’t get here overnight, and we won’t get out overnight either. Luckily, we needn’t eat this entire elephant at once.

Regarding the more easily addressed who-can-commit-their-lives-in-whatever-way-they-choose issue, just find a chapel that can conduct a wedding ceremony as you like it, and wash the government right out of your hair. It has no business being there. Problem solved. In good theory of governance at least.

The Supreme Court’s impending decision (whether the several states are required to recognize gay marriage licenses of other states, or issue their own), is poised to totally overlook the fact that the First Amendment precludes it from being in the field at all. Marriage is a religious issue, not a secular one. People are bound to each other before their God. What about the godless? Then it’s just a contract, which is fine in a free state as long as no one is harmed, and government’s proper role is merely tangential. Contracts are enforceable.

We are thus reminded that this “high court” has repeatedly turned the Constitution upside down, just not hard enough yet to send the rabble into the streets with torches and pitchforks. A whole lot of pitchforks.

Government won’t take the holy-matrimony truth lying down of course, they’ll simply ignore it, like all other inconvenient truths. But it’s getting close to time to stand up to them. Holy matrimony and the ban on interfering with religion demand it.

Conservatives and liberals alike who demand that government coerce people to see religion their way miss the point altogether -- that is not a role assigned to government. Fight for that and we get what no one wants, which is at the heart of many of the nation’s ills, usurpation of power.
Here's a Three-Word Policy That's Been Effective in Stopping School Shootings
Matt Vespa
'Sick Son of a Bitch' Beto O'Rourke Crashes Uvalde Press Conference
Spencer Brown
Here's the Only Red Flag We Knew About the Texas Shooter...But It Wouldn't Have Made a Difference
Matt Vespa
The National Rifle Association Responds to Uvalde
Katie Pavlich
And This Is Why NBA Coaches Should Zip It When It Comes to Politics
Matt Vespa
Biden Makes New Push For Gun Control
Katie Pavlich