Adam Guillette
|
Posted: Jan 18, 2020 12:01 AM
Share   Tweet
The opinions expressed by columnists are their own and do not necessarily represent the views of Townhall.com. 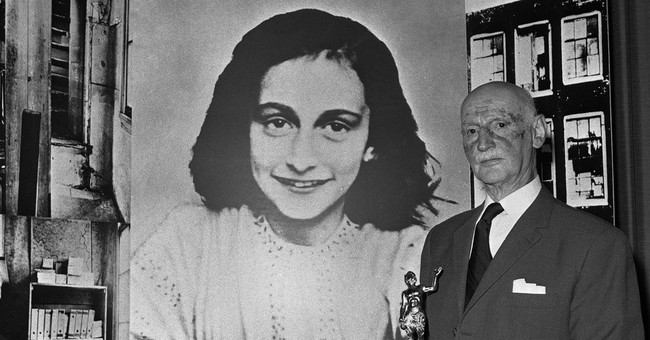 NowThis and its allies are so desperate to smear President Donald Trump that they’re resorting to lies about the Holocaust.

In one of the outlet’s latest propaganda pieces, NowThis sat down with a radical leftwing group of campus Jews and Palestinians and gave them an opportunity to promote their extremist views. While it’s nice to see Jews and Arabs sitting together in peace, the bloom comes off the rose when we learn that they have only come together to promote lies and hate.

Perhaps the biggest lie perpetuated in the video occurred when one member of the group compared the plight of immigrants on the American border to that of Anne Frank.

“We're seeing people die at the border from lack of medical care,” she said. “That's how Anne Frank died. She didn't die in a concentration camp. She died of typhus."

In these tumultuous political times, there are many areas of disagreement — but surely we can agree that Anne Frank died tragically in the Bergen-Belsen concentration camp.  NowThis agrees, so in the captions they knowingly changed her words to read, “she didn’t die [from] a concentration camp.”

After a significant amount of social media backlash, NowThis deleted that portion of the video entirely.

In the words of a typical woke snowflake leftist, this is problematic.

First of all, it’s unlikely Anne Frank would have contracted typhus if she were living in lovely Amsterdam and not locked away in an actual Nazi concentration camp.

Some brave individuals may seek to achieve the American Dream by illegally crossing the border, but none do so after having guns pointed at their head by actual Nazis.  To compare these situations is insulting to anyone with a relative who suffered from the Holocaust.

NowThis took things a step further though by insulting our intelligence.

Most viewers consume NowThis videos on Facebook and thus will likely read the captions but not hear the actual words.  Rather than acting as a news outlet, they’re providing PR cover for their ideological ally.

What kind of journalist knowingly changes the quote of an interview subject?

And exactly what points was their interview subject making?  If Anne Frank had instead died of starvation, would this loon be arguing that failure to adequately fund food stamps is comparable to the Holocaust?  What if she had been shot by a prison guard – would that be used to make the case for gun laws? I wouldn’t put it past her.

You might be wondering, what about the portion of the video where they hear from a mainstream Jew or – heaven forbid – a Trump supporter?  Naturally, this never happens. That’s because NowThis isn’t a news outlet, it is a propaganda outlet.

Many parents and grandparents are worried about their children and grandchildren being radicalized by their college professors or by textbooks.  They forget that many students attend class sparingly and read textbooks only under protest. Classes and studying merely get in the way of having a social life, after all.

However, young people spend hours and hours each day on social media.  They endlessly scroll through their feed and see propaganda like this from both NowThis and BuzzFeed.

And remember that these sites build their tens of millions of followers by sharing clickbait lists and puppy videos before pivoting to radical leftwing propaganda.  They engaged in a diabolical bait-and-switch. People signed up for lighthearted content in their newsfeed, but instead are getting lies about one of the greatest tragedies in human history.

I’m always annoyed when someone compares their political situation to the Holocaust, but when the comparison is made by a fellow “member of the tribe”  it truly becomes morally outrageous.

Adam Guillette is the President of Accuracy in Media.