The Next Step in the Fight Against Sex Trafficking 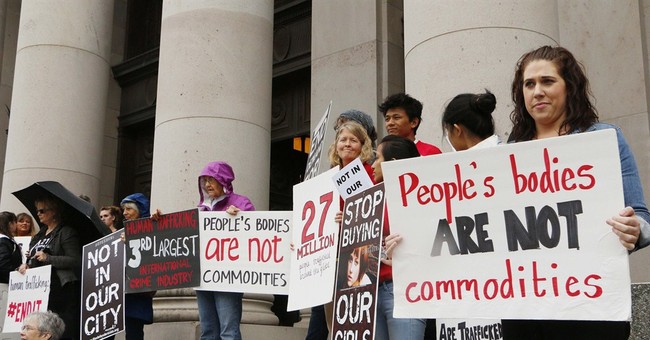 Sex trafficking is a form of slavery older than the nation itself. The federal government, however, does not have a great track record in fighting it. In fact, it wasn’t until 2000 that Congress explicitly recognized sex trafficking as a federal crime.

Over the past few years, Congress has routinely taken bipartisan action to fight against trafficking, yet sex trafficking seems to continue unabated. This is largely because the methods of recruitment and sale of sex trafficking victims has evolved with technology—but U.S. laws have remained static. But this week, when the House votes on H.R. 1865, the Allow States and Victims to Fight Online Sex Trafficking Act (FOSTA), we will be sending a clear message: the businesses that sell our children online can no longer do so with impunity.

New research shows that underage victims are increasingly likely to first meet their trafficker online, and the majority of underage victims have been advertised or sold online. How is it that America’s children can be sold online like a t-shirt or take-out? It is because websites like Backpage.com have beaten the system and created sophisticated marketplaces where traffickers and buyers can anonymously post and respond to ads selling victims.

Backpage.com is not a neutral sales platform. It knowingly facilitates child sex trafficking, coaches advertisers on how to post “clean” sex trafficking ads, and whitewashes ads that sell children before posting them anyway. Last summer, Backpage.com was exposed for actually paying a contractor to actively solicit and create illegal sex ads.

Since 2010, several brave sex trafficking victims have sued Backpage.com--exercising their rights to seek justice against the website that facilitated their slavery--and state Attorneys General have prosecuted Backpage.com for its criminal conduct. But Backpage.com has won these legal fights because of a little-known law, section 230 of the Communications Decency Act of 1996 (CDA). Section 230 has been interpreted so broadly that courts have ruled in favor of Backpage.com despite the website’s clear criminal conduct.

In August 2017, the Sacramento Superior Court dismissed charges brought by the California Attorney General against Backpage, saying “If and until Congress sees fit to amend the immunity law, the broad reach of section 230 of the Communications Decency Act even applies to those alleged to support the exploitation of others by human trafficking.”

When it passed the CDA in 1996, Congress intended for section 230 to motivate websites to screen explicit content in good faith, and to protect these websites from liability for third-party content posted on their platforms. It wanted to provide reasonable protections to websites that hosted third-party content--not protect websites that are engaged in active criminal conduct. Congress obviously never intended for section 230 to create a lawless internet where businesses can commit sex trafficking crimes online that they cannot commit offline.

Misinterpretation of section 230 has handcuffed state and local efforts to combat trafficking, leading 50 state Attorneys General to call on Congress last summer to untie their hands and allow them to bring online traffickers to justice. I find it hard to imagine that if a neighborhood business hosted a slave auction, the auctioneer would not be held criminally liable. But that’s exactly what is happening with websites like Backpage.com.

Congress holds a simple solution in its hands: give prosecutors the tools they need to take down bad actor websites, and amend section 230 to clarify that it does not protect websites that intentionally promote prostitution and facilitate sex trafficking. This is exactly what FOSTA will do and why it has the support of over 170 cosponsors, law enforcement organizations, the tech community, and anti-trafficking organizations. FOSTA will create a new crime that targets how websites are engaging in the online sex trade. It will lift barriers that inhibit state and local prosecutors from protecting their communities. It will produce more prosecutions of bad-actor websites, lead to more convictions, and put more predators behind bars. Fewer businesses will enter the sex trade, and fewer victims will ever be sold and raped.

I wrote FOSTA because it is heartbreaking to watch survivors struggle to piece their lives back together alone, while our justice system shields the websites that sold them. Tuesday, when the House votes on this bill, survivors will know that they are no longer alone, and justice will no longer be out of reach.