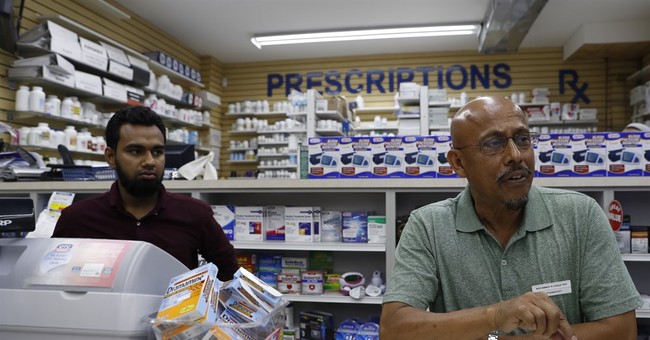 Before entering public service at the federal level, I spent most of my life serving my community in a different way. As a pharmacist for more than 30 years, I saw firsthand the impact that prescription drug prices have on everyday citizens and families.

As a result of research and development I have seen improvements in medications that save lives. Illnesses that were once a death sentence are now treatable with a prescription. While this is nothing short of a miracle, these advances are worthless if they are not affordable.

I have seen elderly couples forced to choose between their medications and groceries. I’ve seen mothers struggle to afford their children’s prescriptions. That is what drives me to utilize my background as the only pharmacist in Congress to tackle rising drug prices in America.

To lower costs, there must be transparency, choice, competition and accountability in the health care supply chain. Unfortunately, instead, big business has wedged itself between patients and their health care in a dangerously opaque manner. The most egregious example of this is the middle man in the chain – the Pharmacy Benefit Managers.

The intent of Pharmacy Benefit Managers has evolved from negotiating prescription prices to a multi-billion dollar revenue machine that relies on a complicated system of rebates, formularies with no basis in health outcomes, and preferred networks. The result is fewer choices and less control for patients.

The largest Pharmacy Benefit Manager makes more than McDonalds, Pfizer, and Ford combined. At the same time, as they continue to advocate that they reduce expenses for patients, data from the Centers for Medicare and Medicaid Services shows out-of-pocket costs for patients increased 169% from 1987 to 2014.

The complex system of rebates and fees developed by Pharmacy Benefit Managers has eliminated any incentive to reduce costs. Even worse, it has created perverse incentives to drive costs up.

For example, pharmaceutical companies are often instructed to set a higher list price to deliver a rebate to the Pharmacy Benefit Manager.  If they refuse, the Pharmacy Benefit Manager simply excludes the medication from their formulary. This is the definition of putting profit over patient as it cuts off access to new treatments. Additionally, those rebates, which were intended to drive down costs for patients, can actually add to them, creating an incentive for a higher list price.

As Health and Human Services Secretary Alex Azar said, “everybody is wetting their beak on a percent of a high list price, and we’ve got to change those dynamics.”

Even more shocking, pharmacists are many times contractually prohibited by Pharmacy Benefit Managers from telling their patients when it would be cheaper to pay with cash instead of insurance. I have experienced this and I am grateful President Trump has made eliminating this unfair practice a priority in his quest to lower prices.

Another concern is the alarming amount of consolidation in the market. As the discussion of consolidation continues, it has been abundantly clear that this message is resonating as people grapple with drivers of health care costs. On July 27th, the Energy & Commerce Committee sent a letter to the Federal Trade Commission outlining concerns with the potential effects on the consumer market. The goal is to ensure that mergers are in the best interests of patients and proper diligence is afforded to the review process.

An opinion piece recently published by this outlet falsely claimed that campaign donations from PhRMA is what is driving my work. Unfortunately for the author, if you simply follow the link provided by them, it clearly lays out that neither PhRMA nor any of their members are in my top 25 contributors. Community pharmacists who have dedicated their lives to serving patients across the country take that spot. They are the people who have seen Americans struggle and sacrifice across the country to afford their medications firsthand, just as I have.

I believe every part of the chain has a role to play in lowering prices and has a responsibility to do so. As part of this, we must demand transparency from Pharmacy Benefit Managers and shed light on anti-competitive practices that are not in the best interest of patients. This will have a direct and significant impact to lower costs for patients who need it the most. It is unfortunate that the author has attacked me for this mission and fails to see its necessity while claiming to be working against “abusive, monopolistic behavior.”

I look forward to continued work with my colleagues in Congress, President Trump and his administration to make this happen. Secretary Azar said we need to “fundamentally examine and re-examine the role of Pharmacy Benefit Managers.” We will work together to do just that.