The Radical Left’s War on Police Must End 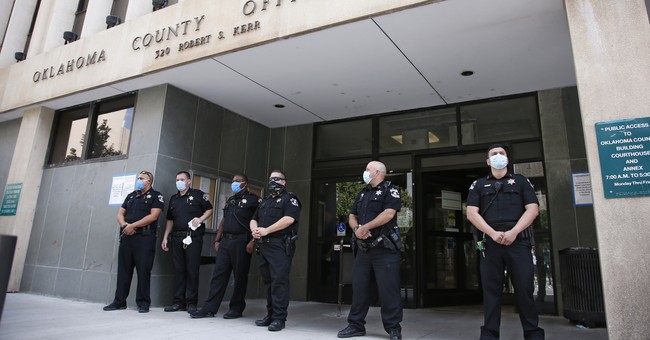 As Democrats hold their nominating convention, America is reminded just how far left the Democratic Party has moved. The radical left has become the Democratic mainstream. Extreme policies like defunding and dismantling police departments have been embraced, and socialist forces are threatening our nation from within.

Police officers are under attack across the country, besieged on all sides by rich, liberal, career politicians. It has become “socialist-cool” to hate cops and love mobs. Cops have been demonized and disparaged unjustly. Police families have been attacked. The leftist war on law enforcement shows no signs of slowing down. It’s getting worse every day.

Despite endless mayhem, mob-rule looting, and violent riots occurring in major American cities, the push to defund and disband police departments has gained momentum. Defund the police has become an actual plank in the Democrat Party platform. For months, we’ve seen an endless barrage of anti-law enforcement rhetoric from career politicians and the corrupt mainstream media. We’ve seen Democrat-controlled cities slash police funding while businesses and neighborhoods are being destroyed. We’ve seen cops targeted with bricks, fireworks, and Molotov cocktails, organized attacks by maniacal mobs. Cops have been run down with vehicles, viciously beaten, stabbed, shot, seriously injured, and coldly assassinated just for wearing the uniform.

There has been a complete void of leadership at the local level. Mayors and governors are frightened to take back their cities from anarchists and Marxists and Antifa terrorists. And what has America heard from top Democratic politicians? What has been said by Democrat-Socialist leaders? Not a word. Democrat silence is deafening.

Cops aren’t surprised. We’ve been a target for years. However, the growing movement to defund the police is now being embraced at the highest levels. This should alarm every American who values public safety. Both Joe Biden and Kamala Harris support the radical left’s war on law enforcement, including efforts to defund the police. Biden said he “absolutely” supports redirecting police funding, and he’s already done it.

During his tenure as Vice President, federal support for state and local law enforcement dropped by hundreds of millions of dollars. Harris, arguably the most liberal U.S. Senator, agrees. She applauded the mayor of Los Angeles for cutting $150 million from the city’s police budget, and she’s compared law enforcement to the KKK. Biden is a cardboard cut-out. He’ll say whatever the extreme left of his party tells him to say. Kamala Harris hates the police. But she has no clue, zero street credit.

She’s just another wealthy liberal career politician. Drop her in the middle of a bad part of any city at 2 AM, you’d find her crying behind a dumpster begging for police to show up. She’s worse than Biden because she still has her mind intact.

These career politicians just don’t get it. Redirecting. Defunding. Call it what you will. The consequences are the same. Slashing law enforcement funding injures public safety and endangers our communities.

I’ve seen it first-hand, patrolled neighborhoods for many, many years. I know the street. I’ve lived it. DC career politicians don’t have a clue about street-level realities. Most police departments are already understaffed and underfunded. Robbing these departments of much-needed resources injures the mission to protect and serve. “Defund the Police” means less training, decreased force readiness, and greater stress on officers. None of that equates to safer communities or building trust in our neighborhoods. It only leads to more crime and a win for criminals.

Our nation will not make it without a strong, standing police force across the country. If this insanity continues, if Biden and Kamala have their way... we will lose the police. Cops will walk away. Do NOT think for a second that these men and women of the Thin Blue Line have no options. Our best, most-experienced cops across the country will leave in droves for better-paying jobs in corporate America. And who could blame them? They have come under incredibly unrighteous fire. They are being driven out of their chosen career to protect and serve.

If we continue down this path, we are in danger of finding out what America looks like without police. That vision of America is frightening. Crime would run rampant. Businesses would board up. Inner cities would look like vast movie sets from end of the world productions. Our economy would permanently crash. Rampant, bold, violent crime would spread into suburban areas, into rural areas. Highways would be blocked, roving mobs of violent criminals would find you, and your family. These are harsh truths. Wake up America. Stand up.

We cannot allow the attacks on law enforcement to continue. America needs the police because mankind is imperfect. Police officers are the line between lawlessness and order. America must stand with them, not against them. That is what I have done in Congress, and it is what President Trump has done in the White House. We have never wavered.

However, our nation is at a crossroads. The future of our country will be decided in less than three months. America must reject the radical left and its dangerous effort to defund the police and dismantle our institutions. We must act now or risk losing the country that we all love.

I will always stand with my brothers and sisters of the Thin Blue Line. I’m prayerful that America will stand with us.

Wake up America. Stand up. The alternative is a dark abyss.

Congressman Clay Higgins (R-LA) serves Louisiana’s 3rd District in the U.S. House of Representatives. He has more than a decade in law enforcement experience and actively maintains his POST certification.