Five Questions about Shootings at Universities 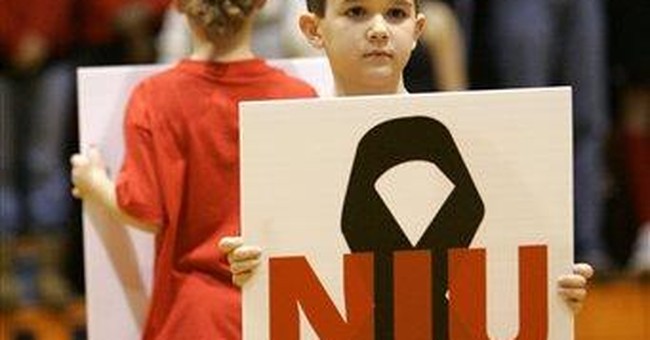 Question 1: Why are murderers always counted in the victims tally? The day after the mass murder of students at Northern Illinois University (NIU), the headline in the closest major newspaper, the Chicago Tribune, was: "6 Dead in NIU Shooting."

"6 dead" included the murderer. Why wasn't the headline "5 killed at NIU"? It is nothing less than moronic that the media routinely lump murderers and their victims in the same tally.

This is something entirely new. Until the morally confused took over the universities and the news media, murderers were never counted along with their victims. To give a military analogy, can one imagine a headline like this in an American newspaper after the Japanese attack on Pearl Harbor: "2,464 Dead in Pearl Harbor Attack"? After all, 55 Japanese airmen and nine Japanese crewmen also died in the attack.

One can only assume that this mode of reporting murders is part of the larger movement toward non-judgmentalism and egalitarianism. To many Americans in academia, the media, and elsewhere, all the dead constitute a tragedy. Suggesting that some dead are more important than other dead is forbidden.

At the San Francisco Zoo, after a young man was mauled to death by a tiger that had escaped its confines, the administrators of the zoo even lumped a killed animal with its human victim: the Zoo set up a memorial to both the man and the tiger. And, unsurprisingly, given the egalitarianism that now also lumps human beings with animals, the tiger received more condolence messages than the human it killed.

Question 2: Which of these three options is more likely to prevent further murderous rampages: a) making universities closed campuses and increasing the police presence on campus (as the president of NIU has promised to do); b) making guns much harder to obtain; or c) enabling specially trained students and faculty to carry concealed weapons on campus?

Because political correctness has replaced wisdom at nearly all universities, colleges are considering options a and b. But the only thing the first option will accomplish is to reduce the quality of university life and render the campus a larger version of the contemporary airport. And the second option will have no effect whatsoever since whoever wishes to commit murder will be able to obtain guns illegally.

But if would-be murderers know that anywhere they go to kill students, there is a real likelihood that one or two students will shoot them first, and if in fact some would-be murderer is killed before he can murder any, or at least many, students, we will see far fewer such attempts made. Even though many of these murderers end up killing themselves, they don't want to die until they have first murdered as many students and teachers as possible.

Of course, there is virtually no chance that the uniformly left-thinking individuals who run our universities will ever consider this option. To do so would mean abandoning what is essentially a religious-like conviction that guns are immoral rather than the people who use them immorally.

Question 3: Why are "shooter" and "gunman" used instead of "killer" or "murderer"?

If a murderer used a knife to murder five students, no news headlines would read, "Knifeman Kills Five." So why always "shooter" and "gunman"? The most obvious explanation is that by focusing on the weapon used by the murderer, the media can further their anti-gun agenda.

Some will say that this is because "murder" is a legal term, and until one is convicted of murder in a court of law, the word should not be used.

I find this unpersuasive. If these murderers can be described as having killed students, then they have in fact committed murder. I believe the major reason for the death of the words "murder" and "murderer" has to do, again, with an unwillingness to make moral judgments, and "murderer" is far more judgmental than "shooter."

Question 5: Would the press note killers' religiosity if they were all Christian?

Imagine for a moment that all the mass murderers at our universities were active Christians. Do you think that the press would at the very least note this? Of course it would, and it would be right to do so.

Yet, to the best of my knowledge, all the recent university mass murderers were secular. Is this worth noting? And if not, why not? Of course, the answer is that few, if any, in the mainstream media would find such a thing worth noting and would likely bristle at its mention. To nearly everyone in the media, the secularism of all the murderers is a non-sequitur. But if they were all active Christians, the same media people would hardly view that fact as insignificant and unrelated.

The fact is that nearly everyone in the mainstream media is secular and therefore cannot imagine associating secularism with anything negative. Secularism is presumed to be all good. But in truth, secularism, a blessing in government, is not a blessing in the lives of most individuals. Now, one can no more blame these college murders on secularism than one could blame Christianity if all the murderers were Christian. But in neither case would it be insignificant.