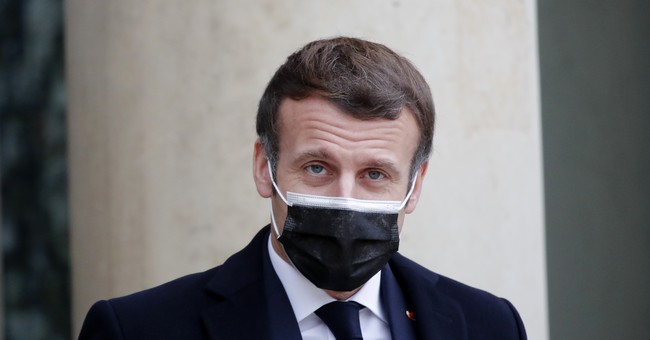 French President Emmanuel Macron received a palmful of disapproval from a French citizen while touring in southeastern France on Tuesday when he was slapped while speaking with members of the public along a fence line.

A man shouted “down with Macronism” in French and then struck the president. Immediately, two of Macron’s bodyguards tackled the man before several others ushered him away. Macron lingered for a bit and spoke briefly with the remaining crowd before leaving. Two men were reportedly taken into custody.

JUST IN - President #Macron slapped in the face during #France tour.pic.twitter.com/Zcu0N4lk3C

The slap attack comes as Macron seeks to improve his waning approval ratings that slumped over the course of the pandemic. His strict lockdowns and slow rollout of the vaccine have many in France criticizing his leadership. Macron's approval dipped four percentage points in March of this year, according to an IFOP poll for a French newspaper, and his approval rating is around 38 percent.

While the slapper didn't say anything specifically about Macron's handling of COVID-19, he was heard shouting “Montjoie Saint-Denis, à bas la Macronie,” the slogan of the late French monarchy followed by what translates to "down with Macronism."

Former President Francois Hollande tweeted his support for Macron, saying in part "To attack the President of the Republic is to deal an unbearable and intolerable blow to our institutions."

Macron is looking to turn the page and move past the Wuhan coronavirus in order to build momentum for the upcoming 2022 election with his reopening strategy. Macron's plan is to lift most restrictions by June 30, and have half of the population at least partially vaccinated by their reopening target later this month.

Recommended
ICYMI: When It Comes to Dumbest Takes on Overturning Roe Kirsten Gillibrand and Jennifer Rubin Take the Cake
Rebecca Downs
Share this on Facebook
Tweet