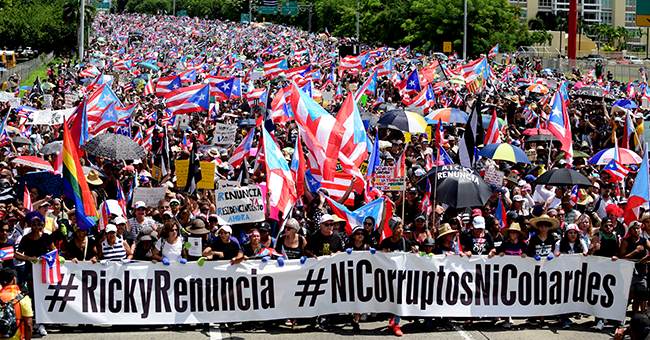 Puerto Rican fury reached a new level on Monday as hundreds of thousands of protesters occupied a highway in the largest demonstration the island has seen in fifteen years, calling for the immediate resignation of Gov. Ricardo Rossello. The protesters are demanding broad-sweeping structural reforms to the governing structure of the U.S. territory.

The anti-governor activists have united under the slogan "Ricky Renuncia" — Spanish for "Ricky Resign". But while the governor said he will not seek re-election, he has yet to resign.

The Puerto Ricans came out en masse on Monday, marching all day in the busiest highway on the island.

Members of the Puerto Rican diaspora also rallied in solidarity with the island's protesters across the United States, including in New York City's Grand Central Station.

The demonstrations continued into the night, with hundreds gathered around the governor's mansion, according to Axios.

The revolution - as people are calling it in Puerto Rico - is being lead by young people. The people standing off the barricades tonight in front of the Governors mansion are between the ages of 15 &amp; 29. pic.twitter.com/JNjwFiy4r5

The situation got tense when some protesters began throwing objects at the riot police. The riot police, in turn, deployed tear gas to disperse the crowd.

We were there as authorities tear gassed protesters in Puerto Rico.

The protests started a week and a half ago after two damning reveals incriminated Puerto Rican elites.

Then a few days later, someone leaked close to 900 pages of secret Telegram messages among members of the island's political class. The governor and senior Puerto Rican officials made fun of constituents, smeared journalists and activists, and made homophobic and misogynistic remarks in the leaked texts. The messages also indicate a wide-spread corruption network that involved numerous agencies.

The twin scandals lit a fuse on decades-worth of pent-up public anger stemming from the island's protracted recession, slow recovery from Hurricane Maria, and painful austerity measures imposed to pay for public debt, inspiring hundreds of thousands of Puerto Ricans to take to the street.

The island's justice department has requested the governor and 11 of his aides to hand over their phone in an investigation that many suspects are tied to the leaked texts. The FBI may also indict several more Puerto Rican officials in the coming weeks.

The protesters have come to expect more than the resignation of Rossello as demonstrations continue to rock the island, increasingly demanding structural changes to how the island is governed, according to the Washington Post. The protesters demand anti-corruption measures, development of a feminist curriculum in schools, and the auditing and canceling of Puerto Rico's public debt.