S.E. Cupp: The Death of a Meme 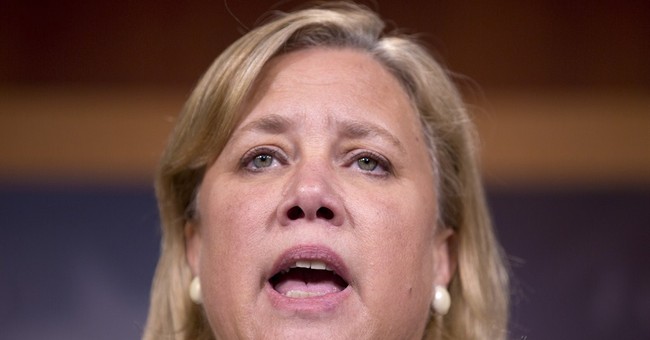 Democrats are busy licking their wounds from the defeats they faced in the 2014 midterms.

If the Democrats are capable of introspection, I hope they realize that the War on Women narrative that drove so many giddy Democrats to the polls in the 2012 presidential election fell spectacularly flat this year. Stick a fork in it, it's officially cooked.

In fact, it's fair to say in a number of races it was overblown allegations of invisible sexism, fear-mongering and pandering about anti-women Republicans (who sometimes were women), and a narrow, single-issue focus on reproductive rights for multi-issue women voters that tanked otherwise viable campaigns.

With an unpopular president and, more importantly, unpopular Democratic policies driving Democrats to desperation this year, we witnessed a meme jump the shark in real time. Let's all take a moment to mourn the death of a truly terrible and regrettable moment in American politics, when liberals unsuccessfully exploited women voters to get out of having to defend their abysmal record of making their lives worse on nearly every economic indicator.

As they prepare to launch a 2016 campaign promoting "the first woman president," let's put some of the low lights in perspective:

In Colorado, Sen. Mark Udall (D) spent so much time on women's issues that he was, not affectionately, nicknamed “Mark Uterus” on the campaign trail. For all that "love" he gave women, he was only 6 points ahead among the fairer sex in the weeks leading up to the election. His opponent, Cory Gardner, was 21 points ahead among men, otherwise known as "the other voters." One high-profile Democratic donor complained loudly that "abortion is all he talks about."

In New York a Democratic candidate for state representative, Martha Robertson, was booed during a debate for accusing her Republican male candidate of engaging in a War on Women.

In Wisconsin, a liberal activist group issued a press release accusing five Republicans of being anti-woman for their criticism of Democratic candidate for Attorney General Susan Happ. But the release neglected to mention all five Republicans were also women themselves because, well, then the claim would sound ridiculous.

In Louisiana, Sen. Mary Landrieu (D) grew so desperate toward the end of her Senate campaign that she accused Southerners, otherwise known as voters, of being both sexist and racist for Democrats' lack of popularity in her state. "Prove you're not by voting for me!" she seemed to imply.

In Texas, Democrats accused Republicans of sexism for daring to scrutinize gubernatorial candidate Wendy Davis' fudged biography. Because "the truth" is a sexist pursuit when a liberal is the target.

When MSNBC host Joy Ann Reid asked Daily Show creator and Democrat defender Lizz Winstead why Davis was having such a tough time there, despite her attention to women's issues, Winstead replied, earnestly, that the problem was "redistricting." In a governor's race. She was not corrected by the liberal host.

For all of these absurd efforts at dodging, spinning, and hyperventilating, Democrats lost crucial races and gained very little among actual women voters. In fact, Democrats' deficits among men outpace Republicans' deficits among women.

Ignoring half the country, crying wolf over non-existent sexism, distracting from the issues with patently absurd gender pandering, and assuming voters of either sex are too stupid to see through it didn't pay off this time. But in the absence of anything else, it appeared to be all they had.

Time will tell if the Left can cobble together an actual agenda before 2016, or if it prefers to rely on hackneyed political slogans from 2011 to get their girl the job. After witnessing the collapse of this narrative in 2014, part of me hopes they stick to the script.