LIVE RESULTS: Runoffs in Alabama and Georgia Plus Primaries in Virginia and D.C. 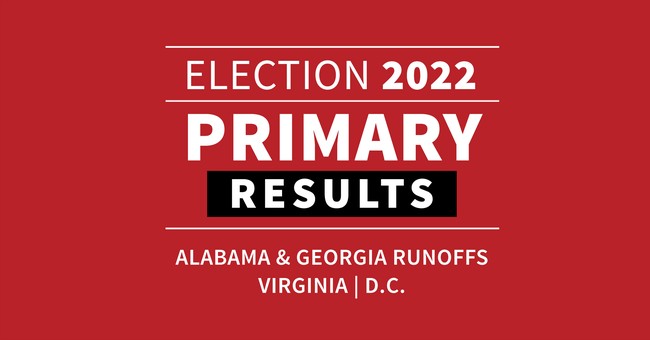 Welcome back for another primary night, this time in Virginia and the District of Columbia, plus runoff elections in Georgia and Alabama.

As always, live results will be posted through the night below, and make sure to stay with Townhall for stories on tonight's results and analysis on what the outcomes mean for this hotly contested midterm election cycle.

In Alabama, polls close at 7:00 p.m. ET and the GOP runoff for U.S. Senate has a lot going on. Rep. Mo Brooks — who was endorsed by Trump before the former president withdrew his endorsement — is up against now-Trump-endorsed Katie Britt — the former chief of staff for retiring Senator Richard Shelby. Britt finished the first round with 45 percent of the votes case while Brooks finished in second place with 29 percent.

The state's 5th Congressional District will also be decided by Tuesday's runoffs between Dale Strong — who finished the first round with nearly 45 percent of the vote — and Casey Wardynski — who received 23 percent.

In The Peach State, polls close at 7:00 p.m. ET and eyes are on the 10th Congressional District where Trump-endorsed Vernon Jones goes up against Mike Collins, who was endorsed by Georgia Governor Brian Kemp — who himself defeated a Trump-endorsed challenger in this cycle's primary. Jones finished the first round with 27 percent of the vote, while Collins finished with 17 percent.

Polls in the Commonwealth of Virginia close at 7:00 p.m. ET on primary day, though few races are notable and just settling the decks ahead of November's general election now less than five months away. Two districts, notably, are in the Democrats' at-risk column in what's expected to be a shellacking for President Biden's party. In Virginia's 2nd Congressional District, Republican state Sen. Jen Kiggans is favored to win and go on to face Democrat incumbent Elaine Luria. In the 7th Congressional District, the GOP primary is more up-for-grabs on Tuesday night, but will determine which Republican faces Democrat incumbent Abigail Spanberger.