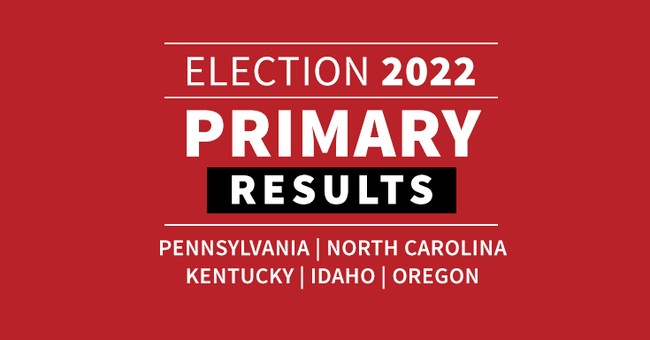 If it's a Tuesday, lately, it's primary night somewhere in America. This week, contests will play out in Pennsylvania, North Carolina, Kentucky, on the eastern half of the country and in Idaho, and Oregon out west. As usual, live updates from each race in these states can be found below.

The Democrat race for U.S. Senate in Pennsylvania also took a turn this week as one candidate — current Lt. Governor John Fetterman — remains hospitalized after suffering a stroke over the weekend and was set to undergo surgery to install a pacemaker Tuesday as his party's voters turned out to decide who will challenge the Republican nominee in November.

Tuesday night will also see more than two-dozen Republican candidates endorsed by former President Donald Trump — some running opposed, some not — face voters. Trump's 2022 primary endorsement record stands at 58-1 before Tuesday's races, and recent attacks on the 45th President of the United States and his supporters as "Ultra MAGA" have only served to energize the base he represents. So pop the popcorn and stay tuned here and to Townhall.com all night for the latest live results and analysis for key races from coast to coast.

Editor's Note: Republicans must take back Congress in 2022 to save America from the Democrats' woke, socialist agenda.

Join Townhall VIP and support our effort to expose the left's destructive policies as conservatives fight to save our country. Use promo code REDWAVE to get 25% off VIP membership!