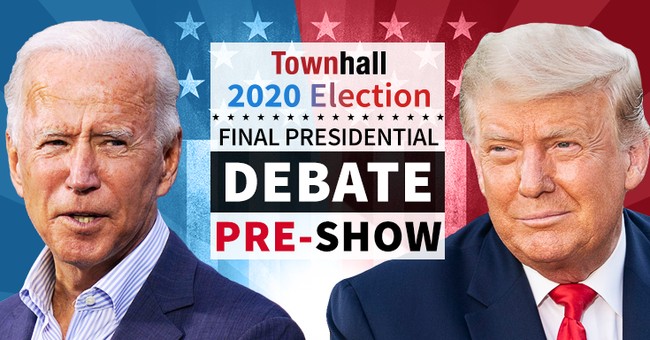 As President Donald Trump and former Vice President Joe Biden prepare to square off for their rematch and the last time before Election Day, Larry and Chris will break down what viewers can expect to see from the two candidates. Will President Trump bring up Hunter Biden and the growing scandal the left-wing media is refusing to cover? Is Joe Biden going to have a meltdown on national tv? How is the new mute feature going to be utilized by NBC debate moderator Kristen Welker? Larry and Chris will discuss all this and more.

To follow Townhall's live coverage of the final presidential debate, head over to our live blog here.

Trump Responds to Reports Claiming That He Has Conflict with DeSantis
Madeline Leesman
Could We See a Replay of the Afghanistan Evacuation Fiasco in Ukraine Now?
Matt Vespa
Did You Catch What's Bizarre About Fauci's Home Office?
Matt Vespa
CDC Director 'Pivots the Language' on What It Means to be Fully Vaccinated
Katie Pavlich
NPR: We're Standing By Our SCOTUS COVID Story Even Though Everyone Said It Was False
Matt Vespa
SCOTUS Declines to Intervene in Challenge Over Texas Abortion Law
Madeline Leesman
CARTOONS | Gary Varvel
View Cartoon
Most Popular