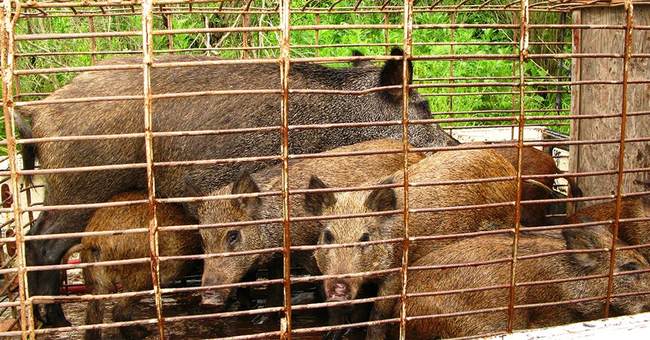 We've all been there. Your small kids are out playing in the yard. Suddenly, within three to five minutes of you opening the door, there are 30 to 50 feral hogs running through. How are you supposed to kill them, you may ask? While this recent scenario caused perhaps the most unexplainable comedic event on Twitter in quite some time, feral hogs are apparently such a problem in Texas that you no longer need a license to hunt them. Starting September 1, you can just go out and shoot them however you please so long as it's public land.

In March of 2019, the Texas Parks and Wildlife (TPW) Commission made several rule changes for the 2019-2020 hunting season. Amongst those rules were several de-regulations. According to ReformAustin.com, "legislators passed Senate Bill 317 to address the 1.5 million feral hogs in Texas that cause around $400,000,000 of damage each year. The new law exempts anyone hunting on public lands from needing a license to hunt feral hogs."

In early August, father Willie McNabb earnestly asked Twitter in the middle of a heated gun debate, "Legit question for rural Americans - How do I kill the 30-50 feral hogs that run into my yard within 3-5 mins while my small kids play?"

Legit question for rural Americans - How do I kill the 30-50 feral hogs that run into my yard within 3-5 mins while my small kids play?

For some reason, McNabb's tweet took off.  Outlets from The Washington Post to CNN to Esquire Magazine all ran stories on his question. It was simply an unexplained oddity that went viral. Well, Mr. McNabb, if you're in Texas and legally own a gun, you can simply wait for those 30-50 feral hogs to go on to public land and then knock 'em off one by one.