You Keep Your Gosh Darn Hands Off These Komodo Dragons, You Sidewinding Smugglers 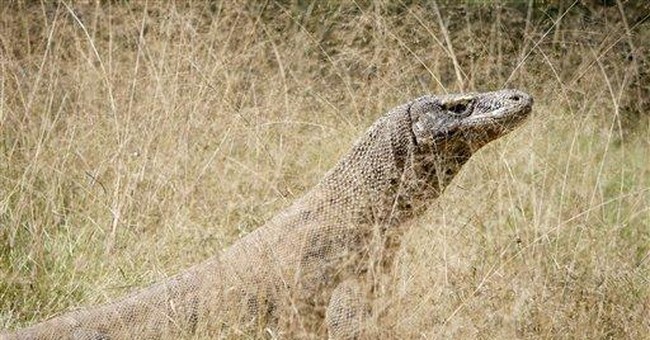 What kind of sick freak would remove the beautiful Komodo Dragon from their natural habitat? Well, apparently there are enough of those environmental perverts that the nation of Indonesia has been forced to ban all tourists from visiting Komodo Island because thieves looking to make a pretty penny are stealing these creatures right from their homes and selling them on the black market.

Bloomberg reports that "The closure is in response to the alleged smuggling of 41 komodo dragons and their sale overseas for about 500 million rupiah ($35,100) each." The ban will begin in 2020, and will also be used as a chance for the government to improve conservation efforts on the island.

The BBC reports that "A police spokesman in East Java said five suspected smugglers had been arrested in Semarang and Surabaya" and that these individuals were selling the Komodo Dragons on Facebook.

In addition to the 41 Komodo Dragons, which are now gone forever, "Officials said they also recovered bearcats, cockatoos, and cassowary birds from the suspected smuggling ring."

Indonesian media adds "the closure will give the government time to conduct conservation as to ensure the food stock of the dragons and preserve the nature and environment in the island, for example, planting endemic plants of East Nusa Tenggara."

The animals cost so much for good reason. It is highly dangerous to come in contact with Komodo Dragons.

As noted by America's national zoo, "Komodo dragons are large lizards with long tails, strong and agile necks, and sturdy limbs. Their tongues are yellow and forked. Adults are an almost-uniform stone color with distinct, large scales, while juveniles may display a more vibrant color and pattern."

Furthermore, these beasts are apex predators. "Komodo dragons eat almost any kind of meat, scavenging for carcasses or stalking animals that range in size from small rodents to large water buffalo."

Bravo to the Indonesian government for taking steps to protect and conserve these animals. Creatures like these deserve to live and be free. Obviously, if you are being attacked by one then you need to shoot it in the face to protect your own behind, but don't be an idiot and don't bother them in the first place. If you'd like to learn more about Komodo Dragons, here's a great short documentary on the subject.