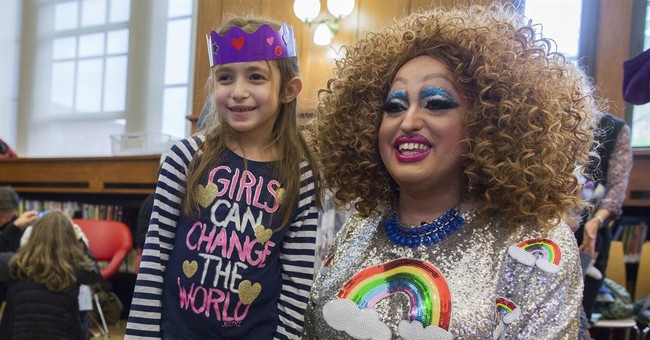 The Petworth Library located in Northwest D.C. will be hosting a “Just Be You: Drag 101” event tomorrow afternoon that is open to the whole family "where drag performers can discuss who they are and what they do.” The event is part of an effort that hopes to promote cultural appreciation for local history which makes D.C. unique.

DC adult librarian, Lisa Warwick, told Townhall that as part of this year’s strategic plan, the library intends to “[give] residents a place where they can embrace the cultural hubs [of DC].” Petworth Library advertised the event saying, “From singalongs to dance performances, the library is indeed open to the whole family, darlings—kids, too. Come learn more about drag and gender, but, most of all, be inspired to just be you.”

Drag performers known by their stage names include Cherry Snow, Miss Buffy Wilde, and Phoenix King. Wariwck told Townhall that Cherry Snow actually goes by the stage name OG Fag, but thought that would be too inappropriate for kids.

OG Fag’s Instagram page is littered with messages such as, “To the random ass stranger who told me I look like a clown and should go to clown school: I hope you enjoy your very normal and boring life. Gender is a construct, tear it apart." The illustrious drag performer also has sent messages regarding the importance of hardwork, saying, "A little throwback to last Thursday and my look for Drag Race at Uproar! The devil works hard, but og fag works harder."

As for the type of performances the crew will be presenting, the focus is “less on literacy” and more about raising cultural awareness about drag. According to Warwick, the event cannot be described as a literacy endeavor nor a children’s program because the performers do not have the proper credentials to conduct a children’s literacy event.

Still, the library will be reading books such as “Sparkle Boy” and “10,000 Dresses” which promote the acceptance of young boys who enjoy make-up, wearing dresses, and other traditionally female activities.

In terms of other educational benefits, there is not a larger purpose other than exposing kids to cross-dressing. The nation's capital's public schools were recently exposed for having a fraudulent graduation rate. In 2017, one third of all graduates should have failed due to absentee and credit-recovery violations, but still received their diplomas. When asked if the event would at all help encourage kids to stay in school and graduate high school, Warwick said, “I don’t think so," before emphasizing again that the event was to focus on drag performers and being yourself.

As for DC history, OG Fag is actually from New York, but has been performing around the DC area for a number of years. Warwick was unsure if the other performers were from DC.

When Townhall first called Petworth Library for more information, Warwick originally transferred the call to George Williams, the DC library media relations manager, before noting, “You’ll probably end up being transferred back to me, but that’s bureaucracy, I guess.”

Indeed, Williams' initial response when asked for the purpose of the event was, “I have no idea.” Williams was preparing for the opening of the new Cleveland Park Library tomorrow, and after a few minutes of conversation referred the call back to Warwick.

There will also be a more mature themed drag show at the library aimed towards older teens and and young adults on June 28th.  Warwick says the library has only received positive responses regarding the shows. The drag performers will earn $150.00 each for their efforts at the two events.