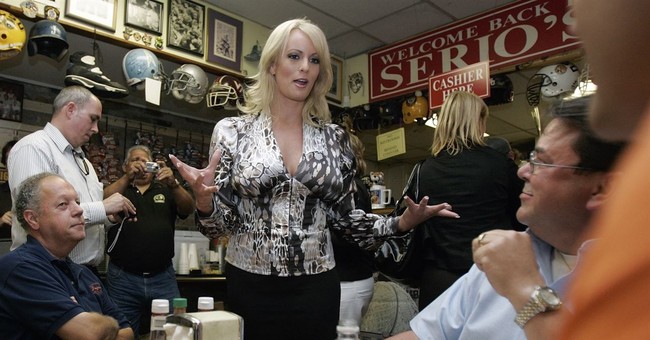 Newsmax CEO and apparent confidante of President Donald Trump, Chris Ruddy, sat down with ABC News This Week today to discuss a variety of issues facing the president. Aside from potential upcoming shifts in personnel management , perhaps the most revealing moment of the interview came when he was asked about Stormy Daniels.

Tonight, in a supposed-tell all interview on CBS 60 Minutes, she will go into detail explaining the affair, an alleged cover up, and subsequent hush money as well as signed legal documents from Trump’s attorney proving this is all true.

But, according to Ruddy, President Trump says this is all a “political hoax.”

“OK, Chris. I want to turn to the president’s mindset about this interview with Stormy Daniels, the interview with Karen McDougal. Did he watch those interviews? And tell us what he’s thinking,” asked host Martha Raddatz.

“Well, you know, I can’t tell you everything he’s thinking, I can only tell you what he told me. He said he thought that -- that much of the Stormy Daniels stuff was a political hoax. Again, those were his words,” said Ruddy.

“So he thinks they’re lying. Even though Stormy Daniels got $130,000,” Raddazts asked for clarification.

Ruddy then questioned what exactly 60 Minutes is going to ask Stormy Daniels and pointed how thorough the media is being with Trump’s alleged scandals, yet constantly give Democrats a pass on scandals of their own.

“I’ll let him characterize. You know, you have to look at this case. You’re a straightforward journalist. I really think you’re fair-minded. When you watch this -- this interview on CBS, 60 Minutes, you’re going to be looking for the same question I’m looking for. Are they going to ask her Stormy, why did you hit -- hire a political hit Democratic attorney, Michael Avenatti, who’s worked for 150 Democratic political campaigns, Joe Biden’s campaign, worked for Rahm Emanuel," Ruddy posited.

"Who’s operating on funding her tremendous public relations effort? And you know, at the bottom line, there’s just never been a claim of harassment. So the president looks at this and I think he’s looking at it like I’m looking at it. This is politically motivated to hurt and embarrass him in some way. And you know what, the end of the day, the poll numbers for the president are up. Gallop has him at a record 40 percent, the Rasmussen at 48 percent approval. So I think the American people are really dismissing this as political -- political witch hunts, ” the Newsmax CEO questioned.

Ruddy's interview can be watched below.