Democratic Congressmen Offer McCabe Jobs in Order to Save His Pension 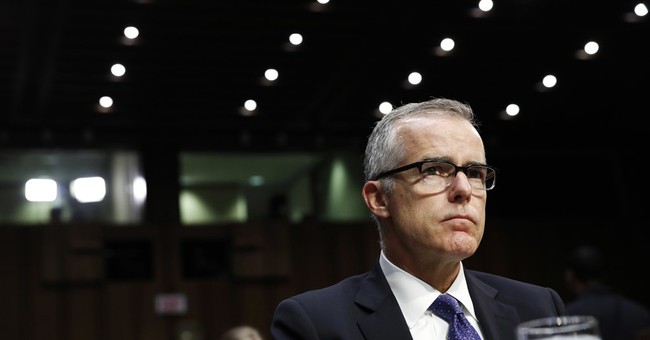 Will former Deputy FBI Director Andrew McCabe be able to keep his pension after all? If he accepts a job offer from one Democratic lawmaker, he may be able to save his retirement.

Former Deputy FBI Director Andrew McCabe was fired last Friday night less than 48 hours away from being eligible to receive his full pension for his service in the FBI. But, MSNBC’s Andrea Mitchell suggested that a member of Congress hire him for a week, then McCabe could extend his service by a few days and remain eligible for total benefits he could receive at this age.

One suggestion from a McCabe supporter: if a friendly member of Congress hired him for a week he could possibly qualify for pension benefits by extending his service the extra days

Well, at least one Congressman saw that tweet and made a job offer. Wisconsin’s second district Democratic Congressman Mark Pocan made an offer to McCabe shortly after.

Andrew call me. I could use a good two-day report on the biggest crime families in Washington, D.C. https://t.co/DYVP00Em0x

Congressman Mark Seth, a Democrat from Massachusetts, also tweeted that he would be happy to consider hiring McCabe as well.

Would be happy to consider this. The Sixth District of MA would benefit from the wisdom and talent of such an experienced public servant. https://t.co/ynQWhdzQpC

But, as Elizabeth Bauer of Forbes notes, it is not exactly true that McCabe will lose his entire retirement package.

"Which all gives the impression of a veteran, elderly federal official being cheated out of his pension accruals due to a vindictive Trump administration.  But this didn't pass the sniff test.  Pensions -- public as well as private -- are required to meet certain vesting requirements, and, in fact, the FERS (Federal Employees Retirement System) benefits vest at 5 years, meaning that benefit accruals cannot be taken away.

In fact, McCabe is all of 49 years old, likely 50 by the time readers see this, and what he lost out on was, as CNN much more calmly recounts, the ability to take his benefits at age 50, rather than somewhere between age 57 and age 62, and he lost his eligibility to a special top-up in benefit formula.  These are, admittedly, tangible financial losses, but it is grossly misleading that various news outlets are giving the general public the impression that he has lost his pension entirely.

But the existence of these special perks, benefits that we in the private sector can barely comprehend in the year 2018, points to a fundamental disconnect between the private and public sector.  Why shouldn't someone whose benefits consist of 401(k) account accruals believe that government pensions work so differently as to punish someone arbitrarily by removing their benefits?  Add to this the fact that retirement at age 50 is well-nigh incomprehensible for the average working American, except perhaps in the case of high-risk, health-sapping occupations, which surely likewise added to the impression that actual pensions, rather than generous ancillary provisions, were being lost."