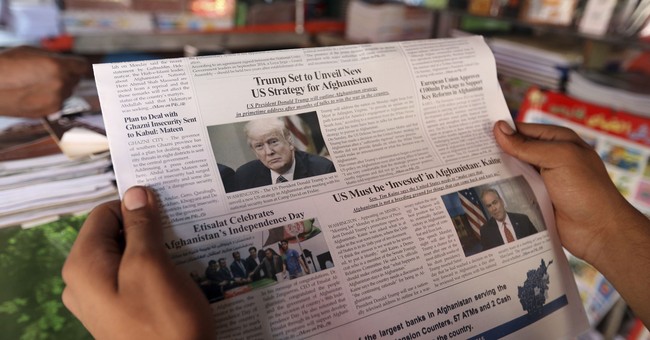 In today’s 24-hours news cycle, many people wish they could isolate themselves from reality for a variety of reasons. For some, it would be absolutely heaven to block all news. It seems like a far-fetched idea, but one liberal in Ohio has actually done it since the day after the presidential election 2016 in an experiment known as "The Blockade." The New York Times published the story today.

“Right after the election, Erik Hagerman decided he’d take a break from reading about the hoopla of politics.

He swore that he would avoid learning about anything that happened to America after Nov. 8, 2016.

“It was draconian and complete,” he said. “It’s not like I wanted to just steer away from Trump or shift the conversation. It was like I was a vampire and any photon of Trump would turn me to dust.”

It was just going to be for a few days. But he is now more than a year into knowing almost nothing about American politics. He has managed to become shockingly uninformed during one of the most eventful chapters in modern American history. He is as ignorant as a contemporary citizen could ever hope to be.

He knows none of it. To Mr. Hagerman, life is a spoiler.

“I just look at the weather,” said Mr. Hagerman, 53, who lives alone on a pig farm in southeastern Ohio. “But it’s only so diverting.”

The piece, written by Sam Dolnick, details how exactly Hagerman came to this point in his life.

“For a guy who has gone to great lengths to essentially plug his ears, Mr. Hagerman sure does talk a lot. He is witty and discursive, punctuating his stories with wild-eyed grins, exaggerated grimaces and more than the occasional lost thread.

I recently spent two days visiting his farm on the condition that I not bring news from the outside world. As the sun set over his porch, turning the rolling hills pink then purple then blue, he held forth, jumping from English architecture to the local pigs’ eating habits to his mother’s favorite basketball team to the philosophy of Kant. He can go days without seeing another soul.

This life is still fairly new. Just a few years ago, he was a corporate executive at Nike (senior director of global digital commerce was his official, unwieldy title) working with teams of engineers to streamline the online shopping experience. Before that, he had worked digital jobs at Walmart and Disney.

But, three years ago he quit that job and purchased land in his home state of Ohio. Now his life is completely different.

Mr. Hagerman begins every day with a 30-minute drive to Athens, the closest city of note, to get a cup of coffee — a triple-shot latte with whole milk. He goes early, before most customers have settled into the oversize chairs to scroll through their phones. To make sure he doesn’t overhear idle chatter, he often listens to white noise through his headphones. (He used to listen to music, “but stray conversation can creep in between songs.”)

At Donkey Coffee, everyone knows his order, and they know about The Blockade. “Our baristas know where he’s at so they don’t engage him on topics that would make him uncomfortable,” said Angie Pyle, the coffee shop’s co-owner.

Hagerman really has prevented any news from entering his life, reports Dolnick.

“Conversations with Mr. Hagerman can have a Rip Van Winkle quality. He spoke several times about his sister, Bonnie, an assistant professor, who lives in, of all places, Charlottesville, Va.

While he and I were talking, I looked over at him at every mention of Charlottesville to see if the name of the city, home to perhaps the ugliest weekend of the Trump era to date, made him flinch.

“So, do you associate Charlottesville” — I would say the name deliberately and with emphasis — “with anything besides your sister?”

He didn’t bite. I think he really didn’t know about the Nazis.

Later, he pointed to a house on a hill and said that before the election, the neighbor had decorated his lawn with an effigy of Hillary Clinton behind bars. I wanted to point out that the recently unveiled Mueller indictment found that a Russian troll had paid for a Hillary impersonator at a Florida rally. But I bit my tongue — Mr. Hagerman didn’t know about Mueller, or Russia, or trolls.”

The entire piece, to be point blank, is pretty boring. We get it. The guy does not watch the news nor engage in politics. Most Townhall readers probably would want all liberals to adopt that kind of life style.

His entire experiment does have somewhat of a point, though. He is refurbishing the land that he has bought and will eventually donate it for public use.

"Mr. Hagerman sees this land as his life’s work. He plans to restore it, protect it, live on it and then preserve it for the public. “I will never sell this land,” he said.

He wouldn’t put it exactly this way, but he talks about the land in part as penance for the moral cost of his Blockade. He has come to believe that being a news consumer doesn’t enhance society. He also believes that restoring a former coal mine and giving it to the future does.

“I see it as a contribution that has civic relevance that aligns with my passions and what I do well,” Mr. Hagerman said. “I’m going to donate it. It’s going to take most of my net worth. That’s what I’m going to spend the rest of my money on.”

Oh, well. Most would say this seems like a weird waste of time, but to each their own. I guess.