NYT: No. 3 Official at Department of Justice Is Stepping Down 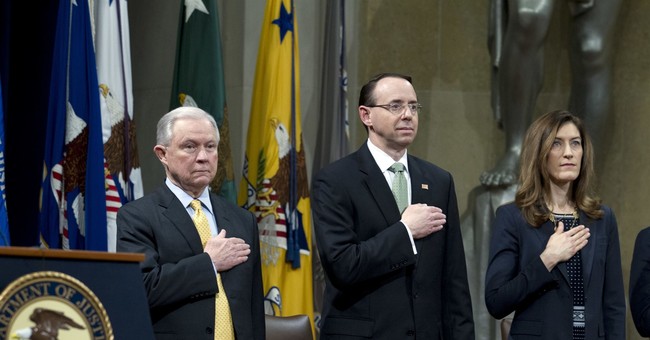 The New York Times reports that the third-most senior ranking official at the Department of Justice, Rachel L. Brand, plans to resign after only 9 months on the job.

Brand serves directly behind Deputy Attorney General Rod Rosenstein, who is number two in command behind Attorney General Jeff Sessions. Since the release of the “Nunes Memo” last week, it has been speculated that President Donald J. Trump may fire or ask Rosenstein to resign. That House Intelligence Committee memo contained serious allegations that Rosenstein, the FBI, and other authorities displayed damaging bias against President Trump that has been the impetus behind the Russian investigation.

President Trump called the Russian probe, headed by special counsel Robert Mueller, a “witch hunt” just last week via Twitter. Had President Trump decided to fire Rosenstein, Brand would have taken over his post at the DOJ. Instead, Brand will be resigning to join the private sector, according to the Times sources.

The New York Times notes that Ms. Brand currently "oversees a wide swath of the Justice Department, including the civil division, the civil rights division and the antitrust division. She helped lead the department’s effort to extend a law that authorizes the National Security Agency’s warrantless surveillance program.”

According to the Washington Examiner, "The announcement Friday arrives following last week's release of a controversial House Intelligence Committee memo that outlines alleged surveillance authority abuse by the Justice Department and FBI. Just last week, Sessions praised both Brand and Rosenstein, noting that "they both represent the kind of quality and leadership that we want in the Department."