Papa Francisco: Journalists Can Sin Too, Ya Know 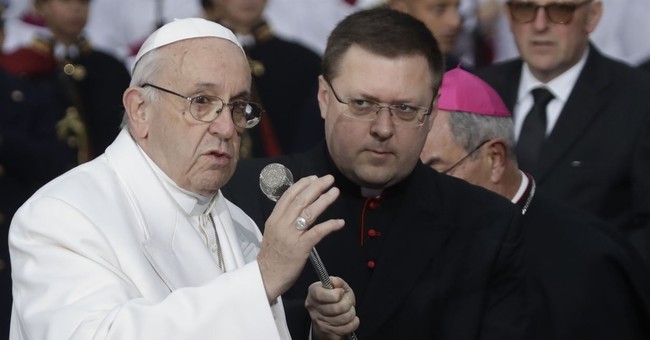 On Saturday, the leader of the Roman Catholic Church emphasized the importance that the media plays in society by reporting the truth to their community. Ultimately, he said that journalists who defame and slander through misinformation commit a “very serious sin.”

Pope Francis told members of the Italian Periodical Press Union and the Italian Federation of Catholic Weeklies that malicious reporters who publish stories for the purpose of ratings or an agenda were simply promoting “useless media outcries.”

He tasked the Catholic media before him to take their job seriously and report the truth and reality.

“You have a task, or rather a mission, among the most important in today’s world: to inform correctly, to offer everyone a version of the facts conforming as closely as possible to reality. You are called to make complex problems accessible to a wide audience, so as to enable a mediation between the knowledge available to specialists and the concrete possibility of its broad dissemination.”

“In this way you one avoids being constantly at the mercy of easy slogans or of extemporaneous information campaigns, which reveal the intention to manipulate reality, opinions and people themselves, often producing a useless media outcry.”

Throughout his message, Pope Francis reiterated the importance of accurate news.

In our time, often dominated by the anxiety of speed, by the drive for sensationalism to the detriment of precision and completeness, by the calculated overheating of emotion rather than thoughtful reflection, there is an urgent need for reliable information, with verified data and news, which does not aim to amaze and excite, but rather to make readers develop a healthy critical sense, enabling them to ask themselves appropriate questions and reach justified conclusions."

Ultimately, he said that journalists who do report fake news "damage the heart of the journalist and harm people."

"We must not fall prey to the “sins of communication”: disinformation – that is, giving just one side of the argument – slander, which is sensationalistic, or defamation, looking for outdated and old things, and bringing them to light today; they are very grave sins, which damage the heart of the journalist and harm people."

While his message was ultimately for Catholic media, all reporters and commentators would be wise to listen to his message.