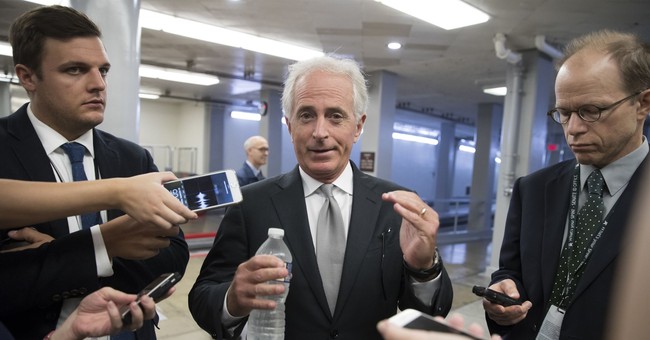 Earlier this morning, President Donald J. Trump lambasted Republican Senator Bob Corker of Tennessee on Twitter. Sen. Corker’s response, however, was just as bitingly critical of the commander in chief.

President Trump started the twitter feud this morning by saying that the soon-to-be retired Senator was largely responsible for the “horrendous Iran Deal,” begged the president for his endorsement, and thought that Corker would be a negative voice in his administration, which is why he was never considered for secretary of state.

Senator Bob Corker "begged" me to endorse him for re-election in Tennessee. I said "NO" and he dropped out (said he could not win without...

..my endorsement). He also wanted to be Secretary of State, I said "NO THANKS." He is also largely responsible for the horrendous Iran Deal!

...Hence, I would fully expect Corker to be a negative voice and stand in the way of our great agenda. Didn't have the guts to run!

In response, the senior senator from the Volunteer State said that White House has become a “adult day care center.”

Corker has often been critical about President Trump, but his comments this week that Secretary of Defense James “Mad Dog” Mattis, Secretary of State Rex Tillerson, and Chief of Staff John Kelly are keeping America and the world form chaos seemed to spark the president's comments today.

"I think Secretary Tillerson, Secretary Mattis, and Chief of Staff Kelly are those people that help separate our country from chaos, and I support them very much.”

A source close to Sen. Corker’s office accused the president of lying, according to the Washington Examiner.

"All claims made in the president's tweets are false," the source said. "The president called the senator early last week and asked him to reconsider his decision not to seek reelection and reaffirmed that he would have endorsed him, as he has said many times."

“Just imagine the possibilities of what can happen if our entire party unifies behind him? If — and this sounds crass — we can purge the handful of people who continue to work to defeat him,” Nick Ayers said, according to POLITICO.

“I’m not speaking on behalf of the president or vice president when I say this,” Ayers continued But if I were you, I would not only stop donating, I would form a coalition of all the other major donors, and just say two things. We’re definitely not giving to you, No. 1. And No. 2, if you don’t have this done by Dec. 31, we’re going out, we’re recruiting opponents, we’re maxing out to their campaigns, and we’re funding super PACs to defeat all of you.”

So far, the White House has not responded to the insults hurled by Sen. Corker.