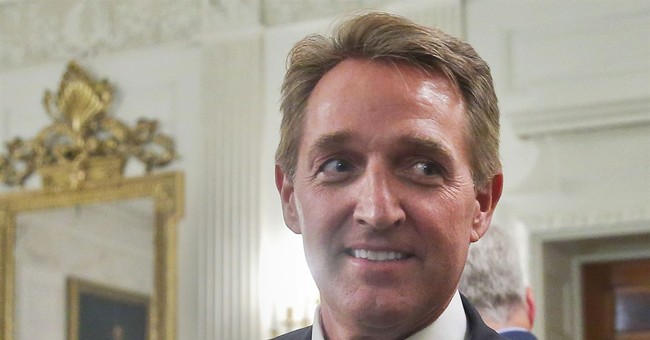 The Associated Press published a piece today highlighting Senator Jeff Flake's free fall in the polls in Arizona's tense Republican primary contest. Flake has seen dwindling support ever since he published his anti-Trump book, Conscience of a Conservative.

That book criticized the Republican Party for not standing up to then-candidate Donald Trump during the 2016 GOP presidential primary. In the book, he says Trump does not have the conservative accolades nor character needed to run the Republican Party. In essence, Flake argued that the party "lost its way" by electing Trump.

The conservative voters of Arizona, however, disagree.

In August, more Republican voters said they would vote for Ward over Flake if the primary were held that day by 42.5% to 28.2%.

The AP piece notes the difficulty that Flake is having in Arizona.

“People are fooling themselves if they think Jeff Flake is anything but a walking dead member of the United State Senate,” said Andy Surabian, whose Great America Alliance is backing Ward.

Despite discontent among some Republicans over Ward, Bannon met with her last week at a conservative conference in Colorado Springs to encourage her campaign, according to a Republican official who spoke on condition of anonymity to disclose the previously unreported private meeting.

It is not only the voters who are not supporting Flake. Donors are shunning anti-Trump senators as well.

"Adding to Flake’s problems, donations to the National Republican Senatorial Committee, the Senate GOP campaign arm, have dried up after the GOP failed to deliver on repealing and replacing the Obama health law. Some donors say they intend to withhold money from incumbent senators like Flake until they start delivering on Trump’s agenda, a strategy encouraged privately by some top White House officials.

“Donors are going to start cutting off funding for all senators until they get Trump’s initiatives passed,” said Roy Bailey, a Trump supporter and fundraiser in Texas. “I think there’s a real kind of movement going around that is catching momentum.”

Flake’s campaign points to strong fundraising numbers and upcoming events including a fundraising visit Monday by Florida GOP Sen. Marco Rubio. But Flake can’t even count on support from fellow members of his Arizona delegation. GOP Rep. Trent Franks demurred when asked if he would be supporting Flake for re-election

“I’m probably not going to, for a lot of reasons, not going to address that,” Franks said. “Obviously Sen. Flake knows how profoundly bewildered and disappointed I was with his actions that, in the general election last year, if everyone had followed that line of reasoning would have resulted in Hillary Clinton’s election.”

It is worth noting that two GOP senatorial candidates who distanced themselves from Trump during the 2016 election could predict what happens next for Sen. Flake.

Senator Mark Kirk of Illinois and Kelly Ayotte of New Hampshire ended up losing their seats after disavowing Trump.

The Arizona Republican primary is scheduled for August 28, 2018.