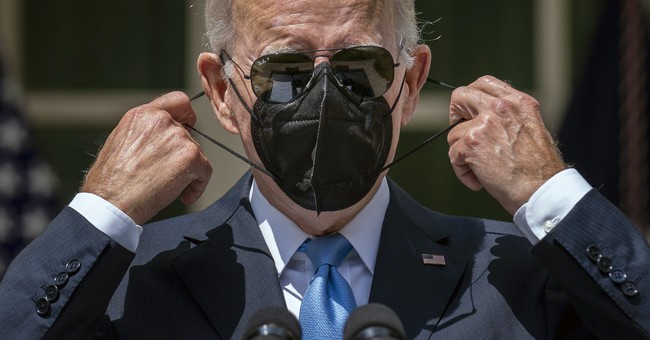 On Friday, President Biden's personal doctor reported that for another day, the commander in chief tested positive for COVID — a full seven days since he tested positive with a "rebound" case of the virus Biden promised to "shut down" when he was campaigning in 2020.

Here's what the latest letter from Dr. Kevin O'Connor to White House Press Secretary Karine Jean-Pierre had to say:

As a result, O'Connor explained, Biden "will continue his strict isolation measures as previously described."

Despite being supposedly sequestered in the White House and strictly isolated, Biden has a bill signing scheduled for 1:00 p.m. on Friday. Here's what the president's doctor had to say about Biden's ability to continue working:

He will continue to conduct the business of the American people from the Executive Residence. As I have stated previously. the President continues to be very specifically conscientious to protect any of the Executive Resident, White House, Secret Service and other staff whose duties require any (albeit socially distanced) proximity to him.

Katie pointed out the lack of transparency and access being enforced by the White House when Biden tested positive on Thursday:

It's day 6 of Biden testing positive for COVID, with symptoms, after a relapse case and yet, the White House still refuses to make his doctor available for direct questioning from reporters.

For the White House to be keeping the doctor treating the supposed leader of the free world muzzled is not a good look — from the first positive test, to the rebound positivity, to the apparent lasting nature of his second instance of positivity. Without someone to provide answers, it leaves reporters — and Americans — to only raise more questions.

Biden's "strict isolation" is also puzzling given the White House making such a big deal of the president and staff "following the science" and doing whatever the CDC says must be done. Current COVID guidelines on the CDC website instruct that patients "End isolation after 5 full days" if fever-free and symptoms are improving — as Biden's case is according to his doctor's letters — with mask-wearing extending 10 days.

Yet Biden is still isolating and only sometimes wears a mask. If only Biden's doctor were available to question on the measures Biden has decided to take and explain what is expected in the days ahead now that the president's COVID saga has dragged on for more than two weeks.

These Are the Republicans Who Voted to Confirm Merrick Garland
Townhall
'Just look at its cafeteria': Tour of the IRS gives reporter a good idea of why the agency needs $80 billion
Twitchy
Airbase in Russian-Occupied Crimea Hit by Devastating Ukrainian Attack
Redstate
We've Got the Deep State on the Run. Here's What Needs to Happen Next.
PJ Media