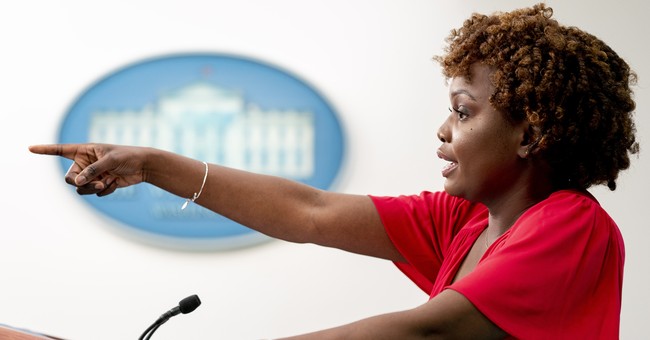 In Thursday's White House press briefing, Karine Jean-Pierre was asked multiple questions about federal legislation being bandied about in Congress ahead of the President and First Lady's recently announced visit to Uvalde on Sunday.

After refusing to comment on Thursday's latest updates from Texas DPS officials — she said the White House would not "prejudge" local law enforcement's response to the shooting — and repeating many of the anti-gun left's talking points lamenting the fact that "America has more guns than people," Joe Biden's press secretary faced a question from Real Clear Politics' Philip Wegmann.

PRESS SEC. JEAN-PIERRE: "America has more guns than people in this country. If more guns were indeed the solution, we would be the safest country in the world—but we are not. And so, the President has been very clear. He wants action." pic.twitter.com/GpSZ4jEMaV

What does the president believe, at this point, is the purpose of the Second Amendment?" he asked as Michael Moore and other leftists renew their calls for a repeal of the right to keep and bear arms.

Unsurprisingly, Jean-Pierre couldn't offer a specific answer as to what President Biden — sworn to uphold the Constitution — believed the purpose of the 27-word Second Amendment to be.

"The president has been very clear," she said, a classic tell that's both generally wrong and a sign that the White House knows their intended policies wouldn't do anything to help the president's deep-underwater approval numbers.

She also repeated Biden's pleas for Congress to act on gun legislation, but said the White House was leaving "the mechanics" to Senate Majority Leader Chuck Schumer. "We want to see action," Jean-Pierre added, but that urgency is not something that's apparently felt by Schumer.

Earlier this week, the majority leader got loads of retweets and puff pieces from mainstream outlets for his "quick" action to clear the way for gun bills dealing with what guns Americans are allowed to keep and who is allowed to bear them. But he faltered.

The legislation at issue was previously passed by Democrats in the House to be considered in the Senate, but Schumer apparently realized he was up against the long Memorial Day weekend and a week out of session for the senate and so he scuttled his plans for votes until after he and his fellow Democrats could enjoy some time away from Washington with their families.