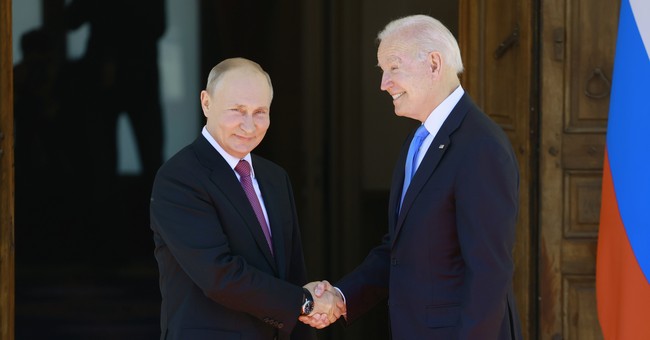 As the cost of a gallon of gas continues to break state and national records, many are criticizing President Biden for taking an energy-independent United States and putting the country in the position of relying upon foreign powers to meet American consumers' demand.

In addition to the pain being felt by Americans at the pump, it's also become clear that being energy-dependent is a national security liability when foes around the world — such as Russia, China, Iran, et al. — get antsy or start an all-out war. Conservatives rightly point to radical environmentalists, unhinged anti-fracking and anti-pipeline activists, and Democrat officials including Biden, Schumer, Pelosi, Sanders, and AOC as the driving force behind anti-fossil fuel policies.

Just a few years ago, though, a congressional investigation into Russian interference in U.S. politics revealed evidence that Russia has had a role going back more than a decade now in the radical campaign to get the United States and other western countries to shift away from fossil fuels — a goal much like the one Biden's Energy Secretary Jennifer Granholm stated last week.

A 2017 letter sent to Treasury Secretary Steve Mnuchin by former Rep. Lamar Smith (R-TX) and Rep. Randy Weber R-TX) as part of an investigation undertaken by the House Committee on Science, Space, and Technology shines a light on how the Kremlin plotted to fund radical environmental groups inside the United States to shift public opinion and policy away from fossil fuels and energy independence:

The Committee on Science, Space, and Technology is conducting oversight of what appears to be a concerted effort by foreign entities to funnel millions of dollars through various non-profit entities to influence the U.S. energy market. According to the former Secretary General of NATO, "Russia, as part of their sophisticated information and disinformation operations, engaged actively with so-called nongovernmental organizations – environmental organizations working against shale gas – to maintain dependence on imported Russian gas." Other officials have indicated the same scheme is unfolding in the U.S. These statements and related reports provide evidence that Russia is also behind the radical statements and vitriol directed at the U.S. fossil fuel sector.

Among these propaganda efforts outlined by the Committee was "a covert anti-fracking campaign to suppress the widespread adoption of fracking in Europe and the U.S.–all in an effort to safeguard the influence of the Russian oil and gas sector" that was funded by "Russia and its government corporations."

During her failed presidential campaign, former Secretary of State Hillary Clinton lamented in a private speech the "phony environmental groups... funded by the Russians to stand against any effort — 'Oh that pipeline, that fracking, that whatever, will be a problem for you' — and a lot of the money supporting that message was coming from Russia" that she encountered during her time as President Obama's Secretary of State.

The U.S. intelligence community has also been aware of the anti-fossil fuel propaganda coming from Russia, including an admission in a report about Russia's actions surrounding the 2020 election that found "clear evidence that the Kremlin is financing and choreographing anti-fracking propaganda in the United States."

In addition to state-run media, the Kremlin also used non-profit organizations to influence Americans according to the letter from Congress to Secretary Mnuchin. Evidently, Russia's government and connected entities were using a shell company in Bermuda to "funnel tens of millions of dollars to a U.S.-based 501(c)(3) which then passes the funds from Russia to American environmental organizations like the Sierra Club, Conservation Voters Education Fund, and others. Those American non-profits then spend the grants "to execute a political agenda driven by Russian entities" while obscuring the source of the money: Russia.

The grants distributed by Sea Change totaled more than $20 million in 2010 and 2011 with the aim to "reduce reliance on high carbon energy," according to the group's 990 disclosures.

The Majority Staff Report released by the Science, Space, and Technology Committee in 2018 revealed even more of Russia's nefarious efforts that are often echoed or similar to those used by Democrats pursuing Green New Deal-style policies. These included "an estimated 9,097 Russian posts or tweets regarding U.S. energy policy or a current energy event on Twitter, Facebook, and Instagram." Ironically, while Democrats were ranting about Russian social media posts being used to "steal" the 2016 election, it was apparently Democrats who were getting helped along by Russian propaganda campaigns that "exploited American social media as part of its concerted effort to disrupt U.S. energy markets and influence domestic energy policy."

A selection of Russian social media posts included in the Committee's report are more or less indistinguishable from leftist politicians and radical environmental activists. On Facebook, the Kremlin propaganda was posted to pages titled "Born Liberal," "Blacktivist," and "Native Americans United." On Twitter, Russians tweeted links to MoveOn.org petitions and posts on The Root that include anti-fossil fuel posts from Democrat lawmakers. One Russian post included in the report was a simple retweet of Senator Bernie Sanders' (I-VT) condemnation of American pipeline projects.

As the information contained in the 2017 Republican letter to Secretary Mnuchin and 2018 Majority Staff Report show, Democrats, radical climate activists, and proponents of Green New Deal policies had natural allies in the Kremlin's propaganda office. And despite more ink and man-hours spent breathlessly covering alleged Russian collusion with the Trump campaign in 2016 than can be counted, there was little to no interest in the reports that Russia was meddling in American energy policy to force the United States into a weak and vulnerable position. In fact, those like Reps. Weber and Smith who sounded the alarm about Russia's propaganda war against fossil fuels in the U.S. were conveniently castigated as conspiracy theorists. After all, the Russians were on the Democrats' side then, and still are today when it comes to wanting America to move away from fossil fuels.

What's more, for Biden and his party to admit now that Russia was pushing for the United States to reduce its own oil and gas production and funding left-leaning climate organizations would be to admit that Biden, The Squad, and proponents of the Green New Deal have spent years acting in a way that's all but indistinguishable from a Russian propagandist. It would also mean admitting that — after killing the Keystone XL Pipeline, canceling land leases, and demonizing the fossil fuel industry while seeing the national gas average pass $4.17/gallon — they got played by Putin.