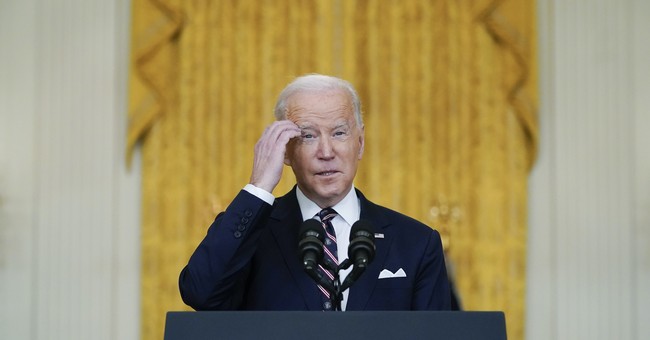 Little more than one-third of Americans approve of the way President Joe Biden has handled Russia as another crisis unfolds on his watch barely more than one year into his time in office while a majority of Americans disapprove of Biden's handling of numerous other policy areas, according to the latest polling from Gallup.

36% of Americans approve of the way President Joe Biden is handling the situation with Russia. Stay tuned for Americans’ latest views on Russia and Ukraine, coming soon. https://t.co/rtte6Hk7Qe

Overall, 50 percent or more of Americans disapprove of President Biden's handling of COVID-19, foreign affairs, the economy, the situation with Russia, and his overall job so far as the leader of the free world.

According to Gallup, "Biden's overall job approval has shown no meaningful improvement since last fall when it declined after the U.S. withdrawal from Afghanistan," while "High inflation and the continuing coronavirus pandemic are likely two factors keeping Biden's approval rating down." No kidding.

What the latest survey numbers from Gallup show (again) is that President Biden's handling of specific issues such as the economy, pandemic, and escalating tensions in Europe are only continuing to drive his overall job approval lower with no issues currently offering a life preserver for his underwater ratings.

A not so happy President's Day for @JoeBiden

According to the latest @Gallup survey, Biden is underwater on every key issue area including -25 on the economy.https://t.co/8O7djB7aXQ pic.twitter.com/u0nIqiikLu

Even among those who self-identified as Democrats, Biden has been losing ground. Toward the beginning of his tenure in the White House, Biden enjoyed overall approval "consistently above 90% early in his term," but approval by those in his own party is now at 79 percent according to Gallup.

Interestingly, "Significantly fewer Democrats approve of how Biden is handling the economy (72%), foreign affairs (71%) and the Russian situation (64%) than approve of his overall performance." This suggests that while Democrats may offer up slightly more overall approval as a sort of knee-jerk reaction to being asked about their party's leader, they don't agree as strongly that his administration is competently or effectively tackling the issues facing America.

And, as Townhall has highlighted previously, Biden continues to suffer significant losses among independents in the latest survey. As Gallup points out, "Biden's job ratings have fallen the most among independents, among whom 35% currently approve, compared with ratings in the high 50s to low 60s in his initial months as president."

With slightly more than eight months before the midterm elections, the continuing decline of Biden's approval overall, among Democrats, and (especially) among independents is more bad writing on the wall for Democrats who have a bare majority in the Senate and a razor-thin advantage in the House.