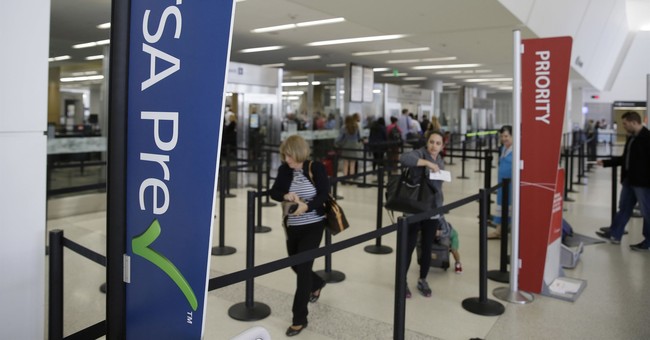 The Federal Aviation Administration (FAA) announced Tuesday that it established a new information sharing partnership with the Transportation Security Administration (TSA) in order to bring a new penalty on "unruly" passengers: stripping their TSA PreCheck privileges.

As an FAA release announcing the news explained, "Under the partnership, the FAA will share information of passengers facing fines for unruly behavior with TSA who may remove the passenger from TSA PreCheck® screening eligibility, which is a privilege reserved for low-risk travelers." In addition, the TSA "will share information to help the FAA identify and locate unruly passengers to serve them with penalty notices."

Bad behavior doesn’t fly, and it doesn’t get a security fast pass. “If you act out of line, you will wait in line,” - @FAA_Steve. The FAA and @TSA have zero tolerance for unruly behavior, and passengers can lose TSA PreCheck® screening eligibility. https://t.co/WcFakSveFD. pic.twitter.com/K28gWToapA

FAA Administrator Steve Dickson warned air travelers that, "If you act out of line, you will wait in line."

Issues with unruly passengers have been documented in viral videos that show flight crews duct-taping passengers to seats and many showdowns between crews and passengers who don't adequately comply with or refuse to follow a federal mask mandate in place for air travelers — one that Biden extended recently beyond its set expiration in January.

NEW: Unruly passengers could lose TSA PreCheck, FAA says.
The move comes amid the agency’s effort to crackdown on bad behavior on flights.

Incidents resulting in passengers being taped in their seats became so frequent across airlines in 2021 that United Airlines issued a company-wide reminder that flight crews shouldn't bring their own tape aboard flights to use on unruly passengers.

According to the latest year-to-date data from the FAA on unruly passengers released Wednesday, there have been more than 5,700 "unruly reports" and more than 4,100 "refusing to wear a mask reports" that yielded slightly more than 1,000 investigations and 325 penalties assessed.

As Katie reported previously, the CEOs of Southwest and American testified before Congress last week and questioned the necessity of a mask mandate for air travelers:

"I think the case is very strong that masks don’t add much, if anything, in the air cabin environment. It is very safe and very high quality compared to any other indoor setting,” Southwest Airlines CEO Gary Kelly said.

“An aircraft is the safest place you can be. It’s true of all of our aircraft. They all have the same HEPA filters and airflow,” Parker said. "I concur."