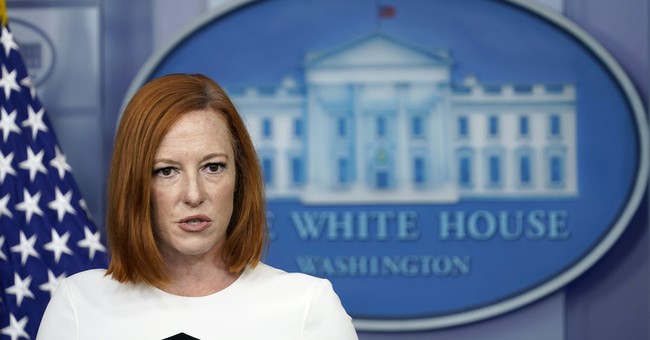 In Tuesday's White House briefing, Jen Psaki was asked about the Biden administration's vaccine mandate and its apparent inability to withstand legal challenges since OSHA rolled out the rule implementing the requirement for tens of millions of American workers to get vaccinated against the Wuhan coronavirus.

Psaki, though, doesn't — publicly at least — think federal judges who've halted the mandate means there's any issue with President Biden's vaccine mandate. "The reason that we proposed these requirements is that we know they work and we are confident in our ability — legally — to make these happen across the country," Psaki said. Because of course she knows better than a handful of federal judges who've halted Biden's vaccine mandates?

Apparently, Psaki thinks that because the federal government "successfully implemented" the vaccine mandate, or so she claims, most other employers in the country should follow their example. Newsflash: The federal government is rarely — if ever — an example of ethical, efficient, or otherwise good business to be emulated.

A reporter asks about a federal judge's decision to block the administration's vaccine mandate for federal contractors.

PSAKI: "We are confident in our ability, legally, to make these happen across the country." pic.twitter.com/lohY6kvMlq

The question about Biden's mandates came after yet another federal judge — this time in Georgia — issued a nationwide injunction on Tuesday against Biden's vaccine mandate for federal contractors. As Katie reported, the judge explained that, "While the Procurement Act explicitly and unquestionably bestows some authority upon the President, the Court is unconvinced, at this state of the litigation, that it authorized him to direct the type of actions by agencies that are contained" in Biden's vaccine mandate.

The Georgia court also noted its concern about the vaccine mandate for federal contractors due to "its practical application (requiring a significant number of individuals across the country working in a broad range of positions and numerous different industries to be vaccinated or face a serious risk of losing their job)," meaning "it operates as a regulation of public health."

And the nationwide injunction of Biden's mandate for federal contractors isn't the only legal strike against the White House's attempt to force as many workers as possible to get vaccinated against the Wuhan coronavirus:

Psaki's spin about the Biden administration's legal ability to mandate vaccines for vast swaths of American workers is wishful thinking, but it's unsurprising. The Biden White House has shown little respect for America's laws or the Constitution, choosing to follow the wishes of radical Democrats over what the law says a president is allowed to do.

From the eviction moratorium to the "remain in Mexico" immigration policy to mandating vaccines, Biden seems set to breach what are understood to be legal limits on his authority — even limits the Biden administration has said it knows exist — without regard for what is and is not legal. As a result, his at times willful ignorance of the law will keep his administration fighting in court where — regardless of what Psaki says — the judiciary will determine where his legal abilities end.