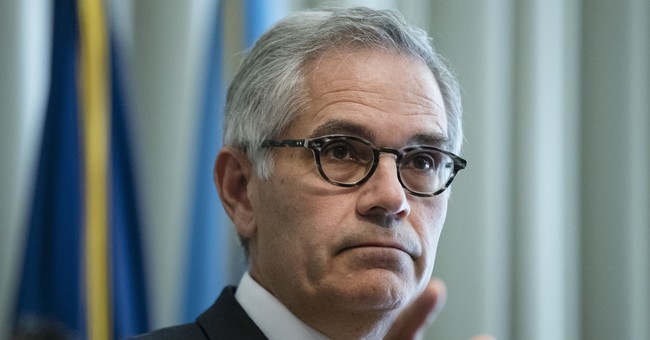 The City of Brotherly Love is anything but in 2021 as America's sixth-largest city breezes past its all-time record for homicides, but the city's Democrat District Attorney is denying there's any issue in his city's streets.

Larry Krasner, who's served as Philly's district attorney since 2017, recently addressed concerns that would-be visitors might have about going to Philadelphia as the city surpassed its all-time record of 500 homicides in 1990.

Instead of expressing concern or explaining what his office would do to hold criminals accountable to reduce the level of homicides or other violent crime, Krasner denied that that the 520+ homicides in 2021 were a crisis.

The #Gaslighting has been turned up to 10. Don’t believe your lying eyes… https://t.co/fGPVx2e6D4

In Philadelphia, Krasner's time in office has ushered in a laundry list of Democratic so-called criminal justice reform priorities. According to local coverage of his administration as district attorney, Krasner has been focused for years on "seeking shorter sentences, diverting low-level offenses from the justice system, and charging crimes at a lower level."

In addition to shorter sentences, policies Krasner has pursued include cutting back post-sentence supervision of those who are convicted. A policy he rolled out in 2019 meant that "someone facing a misdemeanor drug charge, who in the past might have faced a sentence of three to 23 months in jail, plus a year on probation, would instead face just three to six months in jail, plus at most nine months’ probation." When it comes to more serious crimes, the policy aimed at ending "mass supervision" meant that someone "convicted of a felony who in the past may have received two to four years in prison plus two years probation would now receive that prison time plus six months or at most one year of probation."

Krasner has been somewhat curtailed in his efforts to remake Philadelphia's criminal justice system by Pennsylvania laws, but he's been able to accomplish quite a bit that apparently led his city to experience its record-setting number of homicides this year. For Krasner, though, he sees no crime/violence/lawlessness crisis in Philadelphia. And that position isn't going over well with Philly residents who've watched their city's homicide rate grow steadily during the time Krasner's been in office.

"How insensitive must you be to make a statement like that when you know how many people have been shot and murdered and the arrest rate is atrocious,” Stanley Crawford, a founder of Philly's Families of Unsolved Murder Victims Project, told The Inquirer. "There’s been 521 murders and the year isn’t even done yet. We had a pregnant woman shot in the stomach to kill the baby before it got out of the womb; we had a 14-year-old-boy shot 18 times coming home from school; you got a 67-year-old a man driving by Lincoln High School shot in the head and killed,” he added.

If these horrifying scenes playing out in Philly as the city sets the all-time record for homicides isn't a "crisis" according to Krasner, what *would* constitute one?