'Large Portion' of Oil Tapped from Strategic Reserves by Biden Will Go to China, India 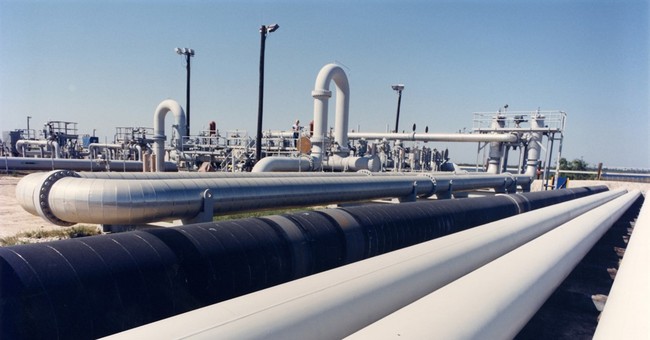 Source: Department of Energy via AP

Supposedly aimed at lowering fuel prices for Americans who continue to struggle under inflation that has accompanied the Biden administration's economic policies, the president announced last week that he would be tapping into the nation's Strategic Petroleum Reserve. It turns out, though, that some of the taxpayer-bought oil pulled from America's strategic stockpile won't even find its way to American refineries and eventually down the line to gas pumps in the United States.

As Bloomberg reported, a "large portion" of the 50 million barrels being released would likely go to China and India. According to traders, that's because the released supplies "consist of sour crude, a type of oil that U.S. refiners are shunning due to its high sulfur content, which makes it more expensive to process." Foreign buyers, on the other hand, don't mind paying less for lower-quality oil.

So, Biden is tapping into the nation's strategic reserve and touting his decision as a move to help alleviate some of the pain Americans are experiencing at the gas pump, but rather than releasing all the taxpayer-bought oil into the U.S. supply, he's sending a "large portion" of the release to other countries, including America's foe, China. It seems unlikely that strategic stockpiles created for use in emergencies were intended to be sent to other countries.

As even some on the left pointed out, Biden — who's staked part of his presidency on "going green" — releasing oil to two countries that are among the world's worst polluters does little to encourage other nations to be more efficient. And it also makes Biden's war on fossil fuels here at home more hypocritical.

The party who supposedly cares so much about the environment and going green is going to give our *emergency* *oil* to the world's top polluters?

Biden doesn't care about you.
He's lining his pockets by doing anything the Chinese say.

Biden killed the Keystone Pipeline on his first day in office, but allowed Russia to move forward with a pipeline project of its own. He's limited fossil fuel projects here in the United States — ones that are cleaner than facilities in China or India — while shipping American oil abroad. It makes no sense, but neither does the rest of Biden's energy policy.

As it stands on Tuesday, the average price per gallon is $3.39, according to AAA. Meanwhile, residents of seven western states are seeing even higher prices, paying between $3.58 and $4.70 per gallon. But Biden got to take his victory lap among most Democrats and the mainstream media as taking unprecedented action to solve an American woe, regardless of where the released oil ends up or whether it makes a difference in what Americans pay at the pump.

Biden previously failed to convince OPEC to release more oil into the market in an attempt to increase supplies in order to lower gas prices. And now with his decision to tap into America's strategic reserves, he's making another misstep by failing to take actions that would move the needle when it comes to lowering inflation and the cost of fuel.