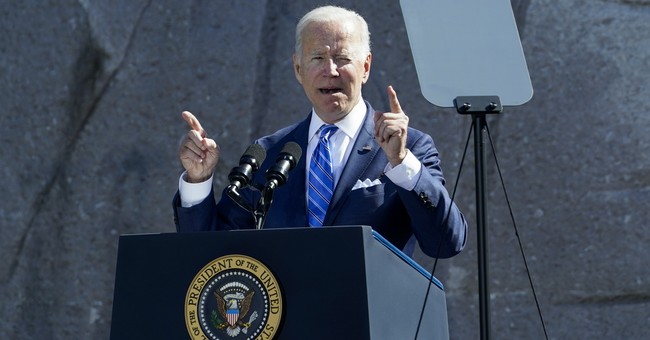 It's no secret that the Biden administration is unpopular. Chants of "F*** Joe Biden" and its euphemistic cousin "Let's go Brandon" have become a national pastime. Americans are feeling the pain of inflation that's proven more than "transitory" as Biden claims. The Wuhan coronavirus that the president said he had a plan to "shut down" continues to spread. The border is entirely out of control. There are still American citizens stranded in Afghanistan. The president's legislative agenda has been stalled in Congress for weeks and is now being pulled apart as a vulture would pick at roadkill as Speaker Pelosi and Majority Leader Schumer try to find something, anything, that their slim Democrat majorities can pass.

To put it bluntly, Biden can't get anything done. Anything he does get done is a disaster. And poll after poll shows that Americans are acutely aware of Biden's failures as his approval continues to tank. The latest data aggregated by FiveThirtyEight as of Monday shows Biden sitting with the lowest approval yet — 43.5 percent — up one-tenth of a percent after bottoming out at 43.4 percent on Sunday.

The record-low approval comes after Friday's FiveThirtyEight average showed Biden reaching the highest percentage of Americans disapproving of him — just over a majority — now sitting at 50.6 percent.

The FiveThirtyEight approval data is an average calculated from several polls. Among the new surveys dragging Biden to the worst approve/disapprove spread of his presidency are Rasmussen (43/56), Ipsos (46/48), and Trafalgar Group (39/58).

Another job approval tracker from Real Clear Politics tells an even worse story for Biden's presidency, showing him nearly ten points underwater as of Monday morning.

President Biden's job approval is bad news for him, but he's not on the ballot again until 2024. His current drowning poll numbers are even worse news for Democrats on the ballot before then, especially when Democrat majorities in both chambers are already razor thin with no room for error. Speaker Pelosi can't afford to lose more than a handful of races, while Majority Leader Schumer can't lose any.

And while flipped leadership in the House or Senate would be a bummer for Democrat leadership, it would pose an even greater threat to Biden's ability to turn around his slumping job approval. If the president thinks it is difficult to accomplish his legislative agenda with Democrats in control of Congress, he's really not going to like trying to force his plans through a Republican-controlled House and/or Senate come January 2023.