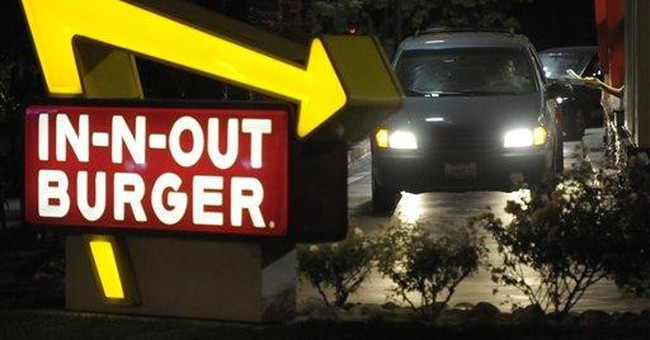 San Francisco, like several other once-great cities ruined by unchecked leftism, has required several types of businesses within its jurisdiction to enforce its vaccine mandate that says a patron without proof of vaccination is not allowed to enter.

But one In-N-Out Burger shop in the iconic Fisherman’s Wharf neighborhood — the only one in San Francisco — wasn’t checking its customers COVID papers. It didn't take long for the San Francisco nanny state to find out thanks to some ungrateful COVID Karens who tipped off the city’s enforcers by calling 311.

According to Newsweek, the San Francisco Health Department paid the In-N-Out several visits after the vaccine mandate took effect in August to look into the reports of noncompliance. First in late September and again in early October, health department enforcers stopped by. Each time, and despite the COVID police’s warnings, officials found that the restaurant was still not verifying customers’ vaccination status.

“Since then, public health inspectors had attempted multiple times to bring the business into compliance with the health order. In-N-Out Burger had not complied by the time the final Notice of Violation and a Notice of Closure was issued,” the department said in a statement provided to Newsweek. "The business was instructed to cease all operations on site immediately because of the threat it poses to public health," the health department said.

Well, the Fisherman’s Wharf In-N-Out is now back open, but with its indoor space closed. And the company’s answer to San Francisco’s mandate is pure gold.

“We refuse to become the vaccination police for any government,” In-N-Out’s Chief Legal and Business Officer Arnie Wensinger told Newsweek. “We fiercely disagree with any government dictate that forces a private company to discriminate against customers who choose to patronize their business. This is a clear government overreach.”

"We refuse to become the vaccination police for any government," a spokesperson for the fast-food chain said. https://t.co/fuZtAuV9mM

Wensinger continued, saying vaccine mandates like the one in San Francisco are “unreasonable, invasive, and unsafe to force our restaurant Associates to segregate Customers into those who may be served and those who may not, whether based on the documentation they carry, or any other reason.”

In San Francisco, where shoplifting and other crime continues to soar, it's puzzling that officials would prioritize harassing a burger joint to the point of shutting it down for refusing to enforce the city's vaccine mandate. But hey, it's San Francisco.