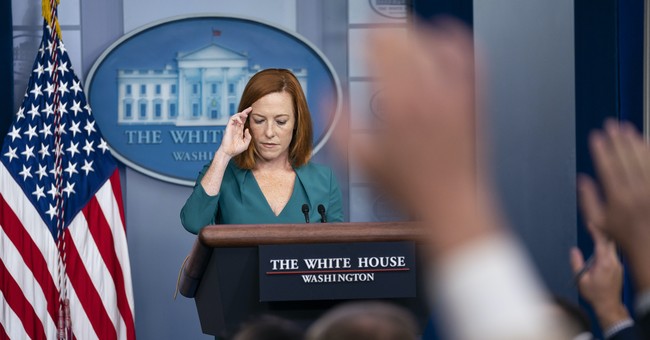 In Monday's White House press briefing, Jen Psaki was asked about Friday's CENTCOM report — that came after President Biden had already left the White House for a long weekend at home in Delaware — confirming that the "righteous" drone strike in Kabul on August 29 had in fact killed 10 innocent civilians.

Saying President Biden "broadly supports" the ongoing investigation into how the mistaken identity of a white Toyota Carolla led to the loss of innocent lives, Psaki explained how "as a human being" the president feels about the failed strike.

Repeating one of President Biden's favorite talking points whenever a loss of life comes as a result of his policies or decisions, Psaki noted that the president knows what it's like to have a death in the family — as if that exculpates him from any responsibility.

"As a human being, as a president, as somebody who has overseen loss in a variety of scenarios, both as a leader and personally, his reaction is it's a tragedy and every loss is a tragedy and he supports the effort to move this forward as quickly as possible and to have a thorough investigation," Psaki said.

.@PressSec refuses to say whether or not anyone will be held accountable for Joe Biden's botched drone strike. pic.twitter.com/jeGAg0M5CT

When it comes to accountability for the strike that killed ten innocent people, including seven children, Psaki wouldn't say whether there would be any firings or other penalties for those responsible in the chain of command.

"I think what's important is that the Secretary of Defense and General McKenzie came forward and made very clear that this was, uh, they wanted to see this move forward quickly, they wanted to be as transparent as possible, they wanted to learn from what had happened," Psaki said. "It's also important to note what the circumstances were here when this strike was made," she added. "Obviously it was done in error and obviously there was a horrific tragedy that happened but I'm not going to predict what the impact will be."

Another question to arise out of the deadly case of mistaken identity is whether the United States can rely on the "over the horizon" capabilities the Biden administration insists will allow successful strikes to prevent terrorists from reconstituting in Afghanistan or posing a threat to America.

"Absolutely," said Psaki when asked if OTH capabilities will work after the United States withdrew from Afghanistan. "And I will just reiterate, as our Secretary of Defense conveyed, as General McKenzie conveyed, that there was a serious mistake. The Secretary of Defense has authorized, as I noted before, a thorough review of the investigation just completed by U.S. Central Command including the degree to which the investigation considered all available context and information, the degree to which accountability measures need to be taken at which level and the degree to which strike authorities, procedures, and processes need to be altered in the future."

DOOCY: "You guys didn't kill people who went after our troops, you killed 10 civilians, including seven children. So does the President still think these over-the-horizon strikes can work?"@PressSec: "Absolutely." pic.twitter.com/kONog19R8n

Psaki also sought to differentiate between "a self-defense strike" like the one that killed ten civilians in Kabul and over the horizon strikes that the Pentagon says will be done differently. However, As CENTCOM Commander Gen. Kenneth McKenzie admitted on Friday after his report on the botched strike was released, the "over-the-horizon strike cell commander" was the individual with final approval for the bungled strike.

Despite her know-nothing "answers" Psaki can still count on the reliable lapdogs to run puff pieces to provide a good ol' pat on the back.

We got two puff pieces of Jen Psaki on the weekend where the Pentagon announced the Biden admin drones 7 kids, France recalled it's ambassador, 12,000 people are being stored under a bridge in Texas and the rejected Biden booster plan & she wasn't available for questions pic.twitter.com/lc94J2Nf78