Andrew Cuomo Stripped of Emmy He Never Should Have Won 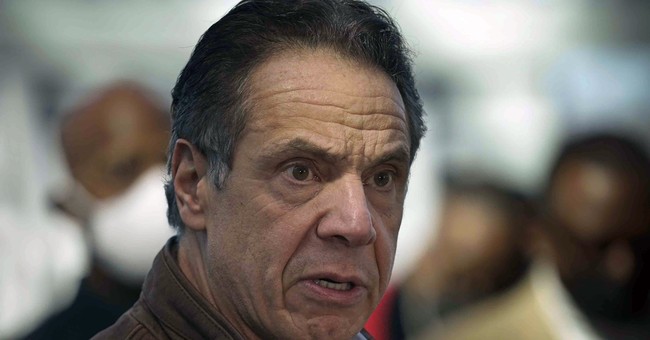 Former New York Governor Andrew Cuomo is finding fewer and fewer of his friends remain now that he's powerless, and he's just lost another trophy of the world's doting appreciation for his failed and deadly leadership.

In a statement released Tuesday, the International Academy of Television Arts & Sciences announced its decision to revoke its award given to an individual who "crosses cultural boundaries to touch our common humanity":

It still boggles the mind that Cuomo would win an Emmy for his Wuhan coronavirus briefings as he mismanaged the pandemic's outbreak in his state with deadly consequences — among the worst in the country — for New Yorkers, especially those in nursing homes and assisted living facilities.

In November of 2020 when it awarded an Emmy to Cuomo, the International Academy explained the honor was in "recognition of his leadership during the Covid-19 pandemic and his masterful use of television to inform and calm people around the world."

Masterful is certainly not the word most New Yorkers would use to describe Cuomo's handling of COVID, but the Emmys didn't seem to notice that the man they watched on TV was just a shiny veneer hiding a dark soul:

"The Governor’s 111 daily briefings worked so well because he effectively created television shows, with characters, plot lines, and stories of success and failure,” said International Academy President & CEO, Bruce L. Paisner.  “People around the world tuned in to find out what was going on, and New York tough became a symbol of the determination to fight back.”

Somewhat unbelievably — but also to be expected given it awarded him an Emmy in the first place — the Academy revoked the award because of Cuomo's resignation following the AG's report confirming his rampant sexual harassment, and not because of decisions that led to the senseless deaths of thousands of his constituents.

The fact that @andrewcuomo got an Emmy and then it was taken away is just a great ending to a story.

One wonders why the embarrassing show of fealty from the Academy wasn't revoked before Cuomo left office in disgrace. Why wouldn't the Academy revoke the award when it was revealed that his orders led to the deaths of vulnerable New Yorkers? Why not when women came forward with credible accusations of sexual harassment? Why not immediately after the New York Attorney General confirmed the allegations?

Whatever the Academy's reasoning, stalwart fighter for truth and accountability throughout Cuomo's disastrous leadership Janice Dean put it well:

It seems the Academy is less interested in honoring those who lead with integrity — that much has been clear since it announced Cuomo would receive an Emmy — and more interested in remaining cozy with the powerful Democrat elite... until they lose their power. Welcome to the party, pal.