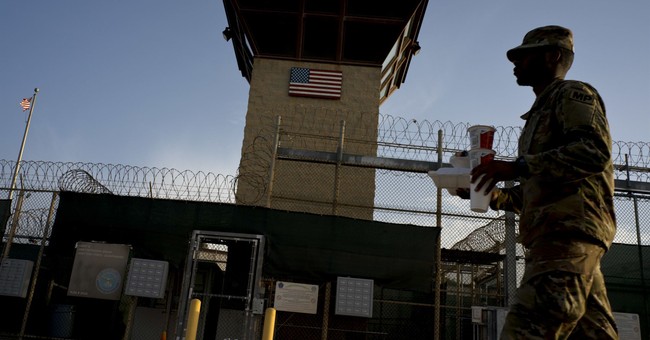 His old boss Barack Obama couldn't close the deal, but that's not stopping President Biden from seeking to close Guantanamo Bay—but he's not taking the usual route. Apparently fearing "political blowback," according to a new report this week from NBC News, Biden is attempting a quieter "under-the-radar approach" to close the U.S. detention facility on Cuba's southeastern coast.

According to NBC's reporting:

After initial plans for a more aggressive push to close the facility — including rebuffed attempts to recruit a special envoy to oversee the strategy — the White House changed course, sources said. The administration has opted to wait before it reaches out to Congress, which has thwarted previous efforts to close the camp, because of fears that political outcry might interfere with the rest of Biden's agenda.

A former administration official told NBC News that Biden's team doesn't want closing Guantanamo "to become a dominant issue that blows up" or for the issue "to become a lightning rod."

Thanks to NBC's reporting, that may be exactly what happens as Biden seeks to "show some progress on closing" the facility before this fall's 20th anniversary of the terrorist attacks of September 11, 2001, after which hundreds of suspected terrorists were sent to Guantanamo. Some 9/11 suspects are still at Gitmo, raising questions about where those believed to have played a role in the attacks that took nearly 3,000 innocent lives on American soil should end up.

According to NBC, Biden hopes to send some detainees to foreign countries and secure approval from Congress to bring the rest to facilities in the United States.

Roughly three-dozen individuals remain at Guantanamo Bay currently—far fewer than the nearly 800 it housed at its peak during George W. Bush's administration. When then-candidate Obama was running for the White House, he promised to close the facility in less than a year once elected. But after taking office, Obama realized that promise was hard to keep.

Bipartisan opposition to bringing terrorism suspects to the U.S. mainland from members of Congress, who also balked at funding the transport operation, kept Obama from following through on his campaign promise.

Biden's supposedly quieter approach "is a response to miscalculations that Biden administration officials believe Obama made," according to NBC.