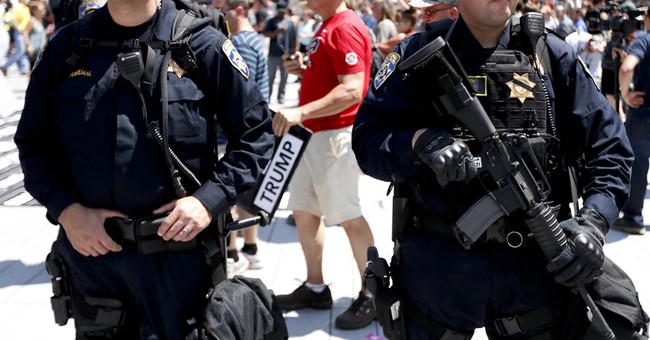 Up to 1,900 members of law enforcement are staying in Case Western Reserve University’s dorms during the Republican National Convention in Cleveland, but some students and faculty found the prospect of police on campus so offensive that the university has established a ‘safe space.’

In a move provoked by heightened racial and terrorism tensions, hundreds of extra police officers were brought to Cleveland to corral crowds and handle protesters. When Case Western Reserve agreed to host the forces, students launched a petition and an anonymous professor penned an

Much of the fear surrounds the “riot police,” referred to as an imposing single entity in the petition, and their possession of guns. The petition seems to suggest that the students do not trust the police with guns: it calls for firearms to be stored off-campus, officers to be denied from entering any other university building but their assigned residence halls and all alcohol and other “mind-altering substances” to be banned.

The anonymous professor disgracefully cast law enforcement in a negative light, writing, “Case Western Reserve University, which ‘improves and enriches people’s lives through research…and education,’ will be ground zero for the storm troopers you will watch on national news next week.”

The university has almost entirely suspended its operations on campus for the duration of the convention, which school administrators said is for the students’ safety, as the officers themselves could be targets of attacks.

“However slim or remote the chance might be that a disturbed individual or individuals might pose a threat to our campus, we had to think carefully about ways to reduce that potential danger,” an administrator said. “In discussing options, we concluded that the single best step we could take was to reduce the number of people on campus.”

The professor’s op-ed takes issue with this:

“What are we teaching our students when … we claim to fear for their safety even though we ourselves have created the conditions causing us to fear for their safety? What does it symbolize when a university library closes while security forces store firearms and pepper spray in dorms, weapons that will likely be used against next week’s demonstrators—some of whom, I fear, might be my students?”

Even though the crowds outside the RNC have been pretty tame so far, and Cleveland said that police will not wear “military-style equipment,” the reaction to the news was so extreme that the university implemented psychological support systems.

The university’s LGBT center and social justice institute are co-hosting one safe space, while the Interreligious Council has opened a second space “for those who want to talk or reflect about their concerns.” Counseling services announced it is also available for students and faculty.

The 280 students living on campus for the summer were asked to find alternate living arrangements for the week and professors were asked to hold class online or at other locations. The New York Times reported that administrators helped the students move into other dorms or provided rebates if they wanted to move off campus.