Rubio Up 64 Points Over Senate Challenger In Latest Poll 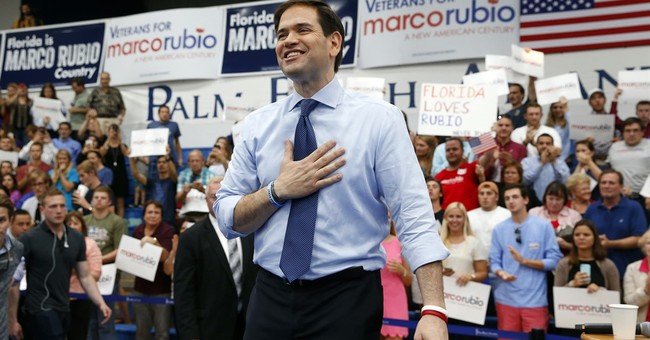 About a week after Sen. Marco Rubio of Florida reversed his vow to return to private life and announced he would be running for reelection, new polls show he is steamrolling his competition.

A poll by the Associated Industries of Florida indicates voters would mark Rubio’s name on the primary ballot over real estate developer Carlos Beruff 71-7, a remarkable 64-point lead. Undecided voters come in at 18 percent, with the remaining four percent split up by little-known candidates Ernie Rivera, an entrepreneur and pastor, and Dwight Young, a law enforcement official.

Local news outlets reported that despite the millions of dollars Beruff has poured into TV advertisements, 76 percent of Floridians do not know who he is. Last week Beruff pledged to put another $15 to $20 million of his own money into his campaign.

The AIF poll showed Rubio is also viewed positively by a significant margin of voters. With 71-21 percent favorable-unfavorable ratings, he is doing better than presidential candidate Donald Trump, who clocks in at 62-32.

The numbers are interesting given Trump’s sweeping primary win in Florida in which Rubio lost every county but his home district of Miami-Dade. Rubio immediately dropped out of the presidential race following his embarrassing loss in his home state.

AIF’s poll found that Rubio is winning the Hispanic vote by substantial margins as well, with 83 percent viewing him favorably and only 7 percent unfavorably. In comparison, Hispanics are more split on Trump, breaking 44-46 favorable-unfavorable.

Beruff seems unruffled by his sizable deficit. He told a local radio news show, “I’ve been an underdog my whole life. It’s sort of fun now to be the only guy left standing.”

Earlier polls have also reflected Rubio’s large lead on the Republican side. A News 13/Bay News 9 survey conducted early this week showed 63 percent of Republicans would support the current senator while 11 percent would support Beruff.

If the election were held today, it seems likely Rubio would win his party’s nomination for Senate easily. But winning the Senate seat itself would be a harder battle—both Rubio and the leading Democratic candidate, Patrick Murphy, are polling at 43 percent.

Texas Sen. Ted Cruz endorsed Rubio when the Florida senator announced he would run again. “Marco Rubio is a friend and has been an ally in many battles we have fought together in the Senate,” he said. “I’m glad to support him in his bid for reelection.”