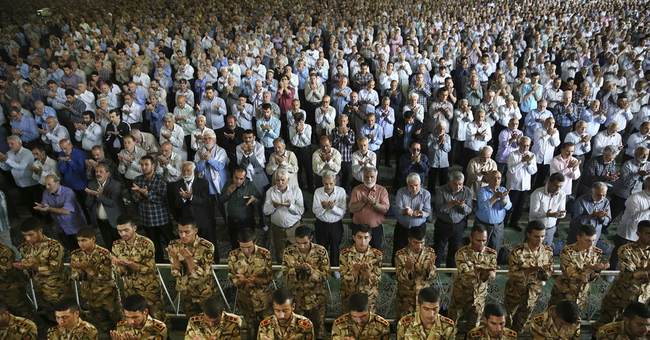 Iranian officials announced Monday that it had thwarted a massive terror plot against its capital Tehran and other cities. Iran had arrested members of an “anti-Islamic terrorist takfiri group” and seized weapons.

“Takfiri” is a derogatory term used by Shiite Iran to identify extremist Sunni Muslims who accuse other Muslims of being nonbelievers.

Iranian officials were vague in their description of the terror plans, but the released statement reported that they apprehended ammunition and bombs that were going to be used to target religious events across the country during the month of Ramadan. The statement called it one of the "biggest terrorist plots" ever.

"Thanks to the efforts of the unnamed soldiers of Imam Zaman (intelligence officers) in Tehran and other provinces, the satanic efforts of the takfiris were neutralized, the terrorists were arrested and a great deal of explosives were confiscated," the statement read.

The foiled plot comes as the latest evidence of tension between Muslim countries in the Middle East. Iran has been working with Syrian President Bashar al-Assad to fight the Sunni ISIS, “which considers Shiites to be apostates.”

In addition to making enemies with ISIS, Iran has also angered Saudi Arabia in recent months. The kingdom executed a prominent Shiite cleric in January, which resulted in attacks on Saudi diplomatic posts in Iran and severance of all diplomatic relations between the two countries. This hostility showed in the statement Monday.

Iranian officials characterized the arrested suspects as ‘Wahhabi,’ which refers to an “ultraconservative school of Islam practiced predominantly in Saudi Arabia,” according to AP.

Terrorist attacks have been relatively uncommon in Iran since its 1979 Islamic Revolution, but experts say the country is getting increasingly involved in Islamic aggression. Last week, Iran’s Revolutionary Guard clashed with an insurgent Kurdish group in the northwest of the country and several died on both sides.

“Militants claiming to be defending the Sunni minority community in southeastern Iran have also carried out a number of attacks against the state in recent years,” BBC reported.

In May Iran’s intelligence minister announced that it had foiled the terror plots of 20 “terrorist groups,” but it is unclear who the groups were—ISIS fighters, freedom-fighting Kurds, or some others.

The Iranian government continues to be secretive in its release of information and morally dubious in its support of authoritarian regimes over U.S. allies. As ISIS expands and Assad holds onto his presidency for dear life, it is more important than ever to keep an eye on Iran’s dealings.