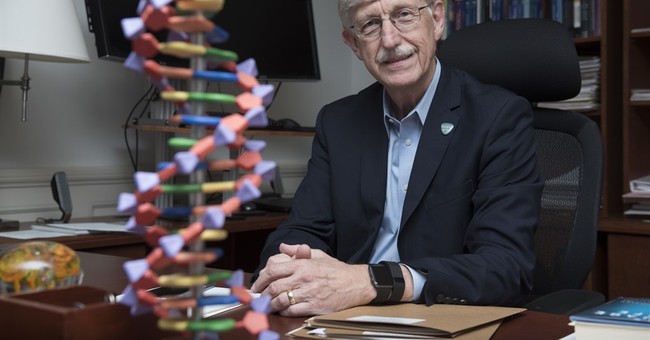 Dr. Francis Collins, director of the National Institutes of Health (NIH), uttered a lot of words on Sunday when asked by Fox News' Trace Gallagher about Florida's low Covid-19 numbers despite a lack of lockdowns or mandates. However, unfortunately for him and fortunately for those of us who want to see more people see through these clowns, none of those words had anything to do with answering the actual question.

Introducing the topic while filling in for Chris Wallace on "Fox News Sunday," Gallagher brought up a chart showing vaccination rates and new case percentages in New York, Maine, Michigan, and Florida. Of the four selections, only Florida is experiencing a decrease in new cases, despite no statewide mask or vaccination mandates and a pedestrian 61% of its population vaccinated.

Listen to the nonsensical word salad that spews from the mouth of Dr. Francis Collins when asked by Trace Gallagher why Florida is doing so well compared to other states despite a lack of mandates, then try and convince me that these so-called 'experts' aren't complete clowns. ?? pic.twitter.com/OUShVPlAVz

"It was only a couple of months ago the media was giving Florida an awful hard time, saying Ron DeSantis' policies were all wrong," Gallagher said. "What's going on here? Why are some of the states with some of the most severe lockdowns and mandates doing poorly and states like Florida that have virtually no mandates doing quite well?"

Unable to respond to the question directly with anything that fit the narrative he is apparently required to stick with, Collins tossed the below word salad, making sure to include the words "boosters," "unvaccinated people," "misinformation," "safe" and "effective" somewhere therein - because no Covidian Word Salad is ever complete without them!

Well, it all comes down to who is actually getting the disease, and especially who's getting sick enough to be in the hospital or to die. Keep in mind, getting a mild case of the illness certainly happens as breakthroughs from the vaccinated folks, although boosters really help prevent that. But if you talk about who's in the hospital and who's dying, those are still the unvaccinated people and there are lots of those in all the states you just mentioned. If there's a lesson here, it's, 'come on America we have missed a chance to be at a much higher level of vaccination across the country that would put us in a stronger position. For all those reasons of misinformation that people have heard, we've not done what we should've done to protect ourselves. If OMICRON is one more wake-up call, then let's wake up. Come on America, you can do this. These vaccines are safe, they're effective. People have been using them for more than a year. 200 million people plus have gotten injected. These are something you want for yourself, your family, your community.