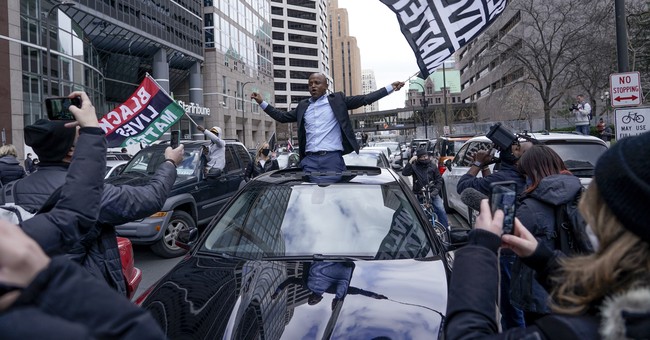 Conservative political commentator and former police officer Brandon Tatum pointed out a grim "trend" that could be developing in the wake of the death of George Floyd last summer, that of potentially suicidal black men seeing so-called 'suicide-by-cop' as a way to provide for their families.

"Nowadays it pays to be a crook," Tatum told Fox News host Laura Ingraham on Tuesday night's "The Ingraham Angle." "It pays to be a thug, because if you can’t pass money down to your family by getting killed by another black man, if you get killed by a cop you get $27 million paid to your family and another $20 million on GoFundMe. So this is becoming a trend, people are trying to go viral losing their lives and demonizing police in the process."

Indeed, before the trial of former police officer Derek Chauvin had even begun, the City of Minneapolis agreed in March to pay Floyd's family $27 million, and memorial donations have broken GoFundMe records.

Obviously, Floyd himself could never have predicted such an outpouring, but Tatum worries that future down-and-out black criminal suspects might see death at the hands of police - and potential icon status as well as millions for their families - as a better alternative than spending the next few months or years in a prison cell.

Fmr officer @TheOfficerTatum on what could be a grim trend:

TATUM: They can get a payout with the family and you can be dead as a doornail. And I don’t know why we continue to let these people destroy our country and push this rhetoric. I wish that we could come to a balance and say there’s things to be improved on both sides, let’s work together to make it happen. But, unfortunately, money talks way too loud for people to listen to basic rhetoric.

INGRAHAM: Yeah, resisting arrest is sadly I think a lot of young people are taught today that, if you encounter the police, the police will shoot you. I mean, I actually think they’re being taught that by a lot of these BLM Marxist types and so their instinct is to run, and then sometimes they're involved in criminality at the same time, but if you run there's always going to be more likelihood that something could go awry. There could be a mistake. There could be a gun fired somewhere else, someone could shoot. But if you don't resist arrest, what are the chances of you getting killed by a police officer in the United States today?

TATUM: It's absolutely zero. I mean just about zero. I don’t think you have any interaction with police if you don't resist arrest. If you look at anybody that was killed by a police officer, justified or not, they were involved in criminal activity and they were involved in resisting arrest. You know, the funny thing is, is that, you may encounter a bad cop. You may encounter a poorly trained cop. But you can avoid all of the negative reactions with that if you do not resist arrest. You do not make your claim on the side of the road. You do those things in court. We should be helping the community understand how do you deal with police, how can you defend yourself if you deal with a bad police officer? Not telling people to go out and use this as an insurance policy. Nowadays it pays to be a crook. It pays to be a thug, because if you can’t pass money down to your family by getting killed by another black man, if you get killed by a cop you get $27 million paid to your family and another $20 million on GoFundMe. So this is becoming a trend, people are trying to go viral losing their lives and demonizing police in the process. I wish people would grow up and say I care about our citizens and I care about the police equally. Let's come together and find a solution and that solution starts with us being united and not divided.

Maybe it sounds crazy. But suicide sounds crazy too, yet around 130 Americans die by suicide every day. If you're a black man about to be caught for something and go to jail, or even just feeling suicidal, especially if you are hyped up on drugs in your system, might you consider going the route of, say, Rayshard Brooks, the Atlanta man shot by police after fighting, stealing a taser, escaping, and shooting that taser back at his pursuers? (Whether or not Brooks was trying to commit suicide-by-cop -- and there's no way to know for sure -- he had to have known it wasn't going to end well.) No matter what you did that contributed to your death, people will march for you, lionize you, help your family, and some may even paint and carry portraits of you. Instead of a common criminal, you become a tragic martyred 'hero,' an object of worship even.

It's scary and sad to think that anyone would think this way, but it's also human nature, and a world our leftist overlords have created by making icons out of otherwise all-around-scumbag criminal suspects shot or killed (rightly or wrongly) by police. And while he certainly did not deserve to die that day, there's no doubt that Floyd, a man who literally held a gun to a pregnant woman's stomach while he robbed her, went from absolute zero to absolute sainthood overnight. Might others want to walk his tragic path?

If Tatum is correct, things are about to get worse, not better, as conflicts between black men and police continue to escalate.